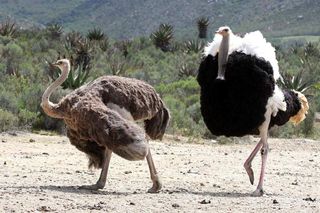 To attract a female, a male ostrich (shown on right wooing a female) will do a little dance in which he crouches down and alternates bringing his black-and-white wings forward, one after the other.
(Image: © Four Oaks | Shutterstock)

As the largest and fastest flightless birds around, ostriches are one of the most recognizable bird species on the planet. But their physical stature isn't the only interesting thing about these birds — their reproductive behavior is also quite peculiar.

The common ostrich (Struthio camelus) has a lengthy breeding season that stretches from March or April to September. Ostriches don't sport flashy new feathers during this time as some other species do, but the males' necks and legs do become flushed with blood and look redder, said Matthew Evans, a behavioral ecologist at Queen Mary, University of London.

To attract a female, a male will do a little dance — he crouches down and alternates bringing his black-and-white wings forward, one after the other. A wooed female will sit down, allowing the male to mount her from behind and inseminate her by inserting his phallus (pseudo-penis) into her cloaca (waste and reproductive orifice). In the South American ostrich, mating takes place in full view of the other females, but pairs do it in private in some other subspecies. [The 9 Weirdest Animal Penises]

Though the other females in the group will also mate with the male, he only forms a life-long mating pair with one "dominant" female. Mating complete, the male then digs a shallow hole and all of the females lay their eggs in the communal nest, with the dominant female's eggs in the center (the best spot). "The dominant female will incubate all of the eggs, and the rest of the females shove off," Evans told LiveScience. "They leave to go and start another breeding attempt with another male."

Interestingly, the males take care of the chicks once they hatch. If a child-rearing male comes across another ostrich father, they will battle and the winner will take both sets of chicks. The idea behind this chick stealing, Evans said, is that having more babies around increases the chances that an ostrich's own offspring will be spared should a hungry predator come along.