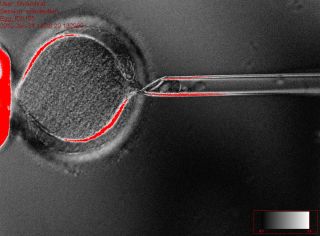 A new stem cell discovery has reawakened controversy about human cloning — though technical challenges mean scientists are far from being able to create human babies as in Michael Bay's 2005 sci-fi flick "The Island."

Not that they would even want to.

"Nobody in their right mind would want to do that," said John Gearhart, the director of the Institute for Regenerative Medicine at the University of Pennsylvania, who was not involved in the study. And indeed, the research wasn't conducted with the idea of creating cloned mini-me's in mind. Instead, scientists attempting to treat diseases of the cell's powerhouse, the mitochondria, refined the technique, which is the same one used to create the cloned sheep Dolly in 1996. [5 Wild Stem Cell Discoveries]

But the parallels between the animal-cloning procedure and the new human one have triggered concern. The U.S. Conference of Catholic Bishops (USCCB) swiftly issued a statement condemning the research, both on the grounds that embryos were destroyed in the research process and over the concern that the full reproductive cloning of humans is on its way.

"They or others may be close to being able to develop cloned human embryos to the fetal stage and then beyond," said Richard Doerflinger, the associate director of USCCB's Secretariat of Pro-Life Activities.

Fortunately for anyone concerned about the specter of human cloning, scientists say they're nowhere close to being able to get cloned human embryos past early stages of development. The study's leader, Shoukhrat Mitalipov of Oregon Health & Science University, told reporters that the early embryos — 100-cell bundles known as blastocysts — seem to have defects preventing them from implanting properly in the uterus and reaching maturity.

A blastocyst consists of an inner mass of cells that will become the fetus. Surrounding this inner cell mass as a hollow ball is a layer of cells called the trophoblast. These trophoblast cells are destined to become the placenta, the organ that nourishes the growing embryo and, later, the fetus. [8 Odd Changes That Happen During Pregnancy]

But in clones, the trophoblast cells frequently fail, perhaps a domino effect from just a few genes going wrong, said Jose Cibelli, a stem cell researcher at Michigan State University. The mother's body may reject the implanting embryo. If implantation occurs, the vast majority of cloned embryos fail to make it past the first trimester of pregnancy.

For example, scientists can take a normal embryo from the uterus of one cow, transplant it into another and have a 60 percent chance of a normal calf being born. Transferring a cloned cow embryo into a cow uterus results in a healthy calf less than 10 percent of the time, Cibelli told LiveScience.

"When you see that scenario, whoever wants to move this into humans quickly, I think it should be criminal," Cibelli said. "We should not do this. It's totally crazy."

So far, Mitalipov and his colleagues have not been able to grow a cloned monkey fetus to term, suggesting that primate reproduction may be even more complex than what is known from Dolly the sheep and other farm animals.

The goal of cloning

So why clone human embryos at all?

The answer is stem cells. These cells have the capability to develop into any tissue in the body — a talent that could make them the stars of regenerative medicine, the goal of which is to grow fresh cells and tissues from patients suffering from various diseases.

Scientists are now able to take regular adult cells and tinker with their genes, turning back time to make these single-use cells pluripotent, or capable of differentiating into multiple cell types. These cells are called induced pluripotent stem cells (iPS cells), and their use is generally supported by anti-abortion groups such as the USCCB, since no embryos are destroyed in their creation.

"We think that it is wrong to attack some innocent human lives here and now to help others down the road," Doerflinger told LiveScience. "Fortunately, the great advances we are seeing in the use of adult and iPS stem cells provide promising alternative ways to heal illnesses without raising people’s temptations to engage in such attacks," he said, referring to the destruction of human embryos.

It's true that iPS cells have great promise. On the other hand, they may have drawbacks. Researchers aren't sure how the human immune system will respond to iPS cells, and there are questions about how stable the revised genomes of these cells would be over time.

"From the mouse data, we know that [embryonic cloning] is better than iPS cells," Cibelli said.

What's more, iPS cells can't be used to treat diseases of the mitochondria, which are tiny organs within cells that convert the molecules in the food we eat into chemical energy the cell can use. Mitochondria have their own DNA, separate from what's in the nucleus. Trying to treat a mitochondrial disease by turning back the clock on an adult cell's genome would do nothing, because the messed-up mitochondrial DNA remains in the iPS cell.

An embryonic clone is a different story. In this technique, scientists take an unfertilized egg cell and remove the DNA in the nucleus, keeping its mitochondrial DNA intact. They then take an adult skin cell, extract the DNA, and insert it in the place of the egg's original nucleus. Now that adult cell's genome can hum along in its new home, creating stem cells without the mitochondrial defects present in its original form. [How Stem Cell Cloning Works (Infographic)]

"That's neat because in one step, you can technically get rid of that [mitochondrial] mutation," Penn's Gearhart told LiveScience.

The resulting embryonic stem cells could then theoretically be grown into adult cells to replace the ailing person's mutated cells.

Time to talk about cloning?

While cloning is not the goal of the controversial new technique, scientists say it would be naïve to ignore the fact that the new research brings them one step closer to being able to create human clones.

"My feeling is that it's sort of an unintentional step in that direction," said Paul Knoepfler, a stem cell researcher at the University of California Davis School of Medicine.

Refining the technique is naturally helpful to anyone out there who might want to start cloning people, Knoepfler said. Any work of the sort would need Food and Drug Administration approval in the United States — not a given, by any means — but rogue clinics or scientists in less-regulated nations could make attempts, he said.

"There may not be a lot of these people out there, but I think there's enough to worry about it," Knoepfler told LiveScience.

Gearhart said concerns about human cloning are "overwrought," given that the scientific community is empathically not interested in crossing the ethical lines involved.

"Who among us would want to take that risk of bringing someone into this world that would be defective?" Gearhart said.

The time for a conversation about cloning may be nearing, however. The cloning of a monkey or other non-human primate would likely be a "strong signal" that it's time to set some rules around human cloning, Cibelli said. Thirteen states currently have laws on the books prohibiting reproductive cloning.

A worst-case scenario would be a clone showing up on the scene before the legalities are hammered out, Knoepfler said.

"As the technology advances, I think the legal and ethical and political dialogue should also go along with it, so we can face these potential future issues in a proactive kind of way," he said.