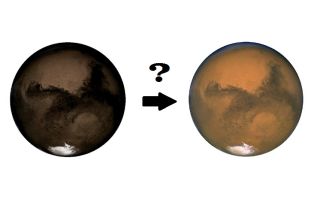 Mars is red now, but it may have looked like charcoal in the past.
(Image: © NASA/ESA/Hubble Team)

NASA's Curiosity rover has beamed back some stunning images of Mars since landing on the Red Planet in 2012, revealing the rugged, and red, scenery of the fourth planet from the sun. But why is Mars red, anyway?

The simple explanation for the Red Planet's color is that its regolith, or surface material, contains lots of iron oxide — the same compound that gives blood and rust their hue. But why does Mars have so much iron, why is that iron "oxidized," and why does iron oxide look red?

It all started 4.5 billion years ago. When the solar system formed, many of the planets landed a dose of iron. Forged in the heart of long-dead stars, the heavy element swirled around in the cloud of gas and dust that gravitationally collapsed to form the sun and planets. Whereas the bulk of Earth's iron sank to its core when the planet was young and molten, NASA scientists think Mars' smaller size (and weaker gravity) allowed it to remain less differentiated. It does have an iron core, but abundant iron exists in its upper layers, also.

Plain-old iron looks shiny black. The element only takes on a reddish tinge when it has been exposed to oxygen, and enough oxygen at that for it to become iron(III) oxide, an atomic fivesome composed of two iron atoms and three oxygen atoms. So why did so much of the iron on Mars' surface oxidize, or gang up with oxygen?

In fact, the jury's still out on that one. For sure, some sort of weathering gradually rusted the iron on Mars. But did the ancient rainstorms that are thought to have occurred on a young, wet Mars rust the iron by pounding the regolith with oxygen atoms freed from water molecules? Or, did the oxidation happen gradually over billions of years, as sunlight broke down carbon dioxide and other molecules in the atmosphere, producing oxidants such as hydrogen peroxide and ozone? Or, as a group of Danish scientists suggested in 2009, have Martian dust storms slowly rusted the iron, by crumbling the quartz crystals that also exist in the regolith and leaving their oxygen-rich surfaces exposed?

Because no one yet knows the right explanation, the color of Mars is, in a sense, still a mystery. But however its surface rusted, the compound iron(III) oxide appears red because it absorbs the blue and green wavelengths of the light spectrum while reflecting the red wavelengths. [Your Color Red Could Be My Blue]

The planet's bloody tinge — visible even from millions of miles away — got it strapped with the name of the Roman god of war, while other civilizations also named the planet for what was once its main distinguishing feature. The Egyptians called it "Her Desher," meaning "the red one," while ancient Chinese astronomers went with "the fire star."