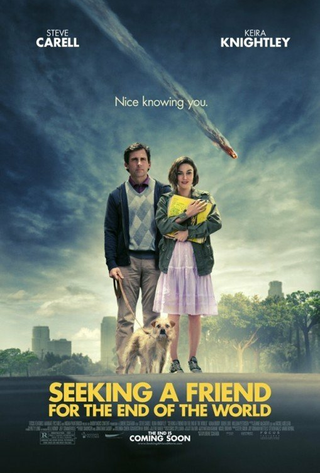 Movie poster for "Seeking a Friend for the End of the World."
(Image: © Anonymous Content, Indian Paintbrush, Mandate Pictures)

Hollywood has tapped into the global upsurge in doomsday fear with a new film about life in the run-up to a world-ending asteroid collision. In "Seeking a Friend for the End of the World," written and directed by Lorene Scafaria, NASA's attempt to deflect an earthbound asteroid has failed, and the mile-wide space rock will surely be the end of us all. Steve Carell and Keira Knightley star as two people navigating the last month on Earth, as the rest of humanity goes a little off the rails.

On newsstands, a magazine cover puts Oprah head to head with Jesus in its "best of humanity" issue. Husbands and wives swap partners, do drugs and binge drink with their 10-year-olds. But aside from these moments of comic relief, the film paints a gloomy picture of life in a world with no future. Suicides are commonplace; so are mobs, murder and destruction. Some characters, unable to cope, simply carry on with their now-pointless jobs or routines. Others get baptized, while most seek a final slice of happiness, such as in the form of a new friend.

Are these reactions realistic? How would we really react if we foresaw our own end? We put the question to Lorenzo DiTommaso, chairman and associate professor of religion at Concordia University in Montréal and an expert on the psychology of doomsday belief. A wide range of responses are probable, he said, but rather than taking a defeatist attitude, belief in an impending apocalypse instills most people with a deep sense of purpose. [Poll: How Would You React?]

"In general, most individuals seek to get their lives in order, in the same way they would as if they discovered that they were terminally ill," DiTommaso told Life's Little Mysteries. "Many of the groups I study expect an apocalyptic end of the world as part of their religious beliefs. For members of these groups, the process of getting one's life in order normally involves putting oneself back into what he or she considers to be a right relationship with God, whether through repentance, confession, adopting a new way of life, and so on."

By far the least realistic aspect of the film is the assumption that society's infrastructure would continue as usual, giving people a platform on which to carry out their end-of-the-world activities.

"In reality … everything we know — government, transport, public utilities, financial markets, food services — would suffer a catastrophic shock that would make life while waiting for the approaching doom very different than it is now. Consider the global impact to these systems after 9/11, and multiply it a thousandfold if, for example, NASA verified that an extinction-level asteroid strike were imminent," DiTommaso said. [Why Asteroid Panic is On the Rise]

It is interesting to consider how reactions would change if the date of doomsday were more distant. "If [an earthbound asteroid] were positively verified but the strike was projected to happen only a thousand years from now, I suspect that after the initial shock, life would not change much at all," DiTommaso said. "This is not an academic exercise: the environmental apocalypse is currently under way, but its relatively gradual process and open-ended timetable make it less important to most people's lives than, say, going to watch this new film."