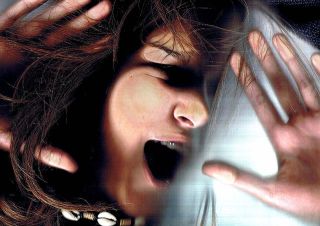 Photo taken by Dave Dyet. There are no usage restrictions for this photo

Moviegoers might want to scoff a bit less when characters talk about the scent of fear. Women exposed to fear chemicals in male sweat tended to see ambiguous faces as being more fearful, according to a new study.

Such research shows for the first time how even the smell of fear can affect how people interpret what they see right in front of them. That fits with previous studies showing that visual and facial cues can affect human emotion and interpretation – but mainly when the situation seems uncertain.

Male participants watched neutral clips, slapstick comedies and horror flicks, while a gauze pad sat in their armpits to collect sweat. Later, female participants had the gauze pads held under their noses as they watched images of faces that changed from somewhat happy to neutral to somewhat fearful.

Researchers chose males as sweat donors because of their larger apocrine sweat glands. The male volunteers used only scent-free shampoo, conditioner and soap provided by the lab several days beforehand, and kept a diet journal to avoid odorous foods such as garlic, onion and asparagus.

Women volunteers ended up more likely to interpret ambiguous faces as fearful when they were smelling the "fear sweat," but only in the case of ambiguous faces. They still interpreted somewhat happy or somewhat scared faces according to what they saw.

Humans rely primarily on sight and hearing, so it's no surprise that smell only comes into play in situations where the other senses are less certain. Animals often rely on their more sophisticated sense of smell as a common form of communication, and even humans may fall back on it during certain social situations.

"The sense of smell guides our social perception when the more-dominant senses are weak," Chen said.