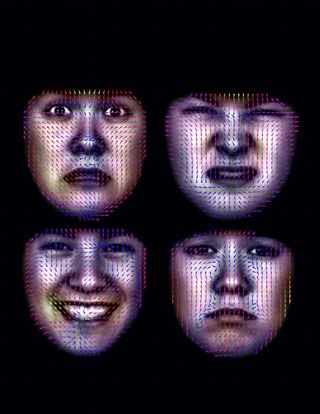 An image showing four different facial expressions (clockwise from top-left: fear, disgust, sadness, happiness). Overlaid on top of each expression is a set of vectors (arrows) indicating how the facial features move from the neutral pose. Larger movement is conveyed by red-yellow arrows. For example, the eyebrows raise in fear relative to neutral.
(Image: © Susskind et al.)

Everyone knows the face of fear.

Upon beholding the chainsaw-wielding ax-murderer in a slasher movie, the damsel in distress usually widens her eyes and flares her nostrils in horror.

It turns out this expression isn't merely for cinematic effect, but actually serves a biological function, scientists have found, by altering the way our senses perceive the world.

"Our hypothesis was that different changes on the face would lead to different amounts of sensory intake," said Joshua Susskind, a psychology graduate student at the University of Toronto who worked on a study testing the function of facial expressions. "The idea is that fear is for vigilance. You'd expect that changes on the face, such as opening the eyes, would be characteristic of fear, because you're trying to assess more information in your environment."

To test this hypothesis, Susskind and his advisor, Adam Anderson, and colleagues took images of people's faces as they posed with expressions associated with fear and disgust. Using statistical models, the team analyzed the faces and found that the two expressions produced opposite facial effects.

The scientists then tested what function these facial changes served. They took various measures of sensory perception, such as volume of air intake, width of the visual field and peripheral vision, and speed of visual tracking. Across the board, the researchers found that when making fearful expressions, subjects breathed in more air, saw a wider field of view, and could visually track targets more quickly.

"We found certain patterns in the ways faces change between fear and disgust," Susskind told LiveScience. "Those changes were very consistent with the idea that fear is expanding the sensory surfaces. Disgust seems to produce the opposite effect, contracting the sensory intake."

When pinching their noses and squinting their eyes in disgust, people simply saw and smelled less.

Darwin was the first to suggest that emotional facial expressions might have evolved for a reason.

"He suggested that they're not just symbolic or arbitrary — they have a purpose," Susskind said. "They increase the likelihood that the animal or the species would survive."

Darwin and others hypothesized that expressions such as happiness (smiling) and sadness (frowning) may serve a social function, by communicating the internal emotion a person is feeling.

Later scientists, such as Silvan Tompkins and Paul Ekman, discovered that the expression of emotions is strikingly similar across cultures — horror and disgust look pretty much the same on the face of a New Yorker as they do on a Nigerian, and people from different cultures can recognize emotions such as happiness, anger and surprise on others' faces, even if they don't share a language.

The fact that emotional expressions seem to be universal led scientists to believe they weren't used only for communication and social purposes, but also served an additional adaptive biological function.

The new study may be the first to measure changes in sensory intake that accompany these facial expressions.

"As far as we know, we're the first to look at the actual consequences on intake of information," Susskind said. "It's only been speculated before."

The scientists don't believe their results are confined to the two emotions they tested. Other emotional face changes may also serve biological functions.

"We'd like to see how this extends to other expressions," Susskind said. "Can you get a measurement of changes in intake with anger? Perhaps you find you're narrowing your intake. We're not trying to say this is specific to fear and disgust."

Susskind and his colleagues would also like to test whether animals express emotions with similar facial changes, and whether these serve the same purposes in other species.