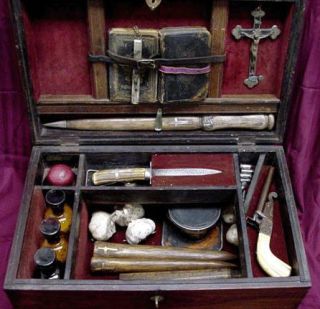 A complete and authentic vampire killing kit, circa 1800 and housed in a walnut case, achieved $14,850.
(Image: © antiquesandthearts.com)

The upcoming movie "Fright Night" tells the story of a Las Vegas, Nevada, high school student named Charlie who suspects that his mysterious new neighbor Jerry (played by Colin Farrell) is actually a vampire who is preying on his classmates and friends.

Charlie wants to slay the vampire but has a problem: He has no experience with real vampires. What powers and special abilities does Jerry have? How can he be destroyed? Everyone knows how to kill a fictional vampire a stake through the heart but does that apply to "real" vampires as well?

Because this is Vegas, Charlie contacts a local showman (and apparent vampire expert who happens to have vampire slaying gear in his apartment) who tells Charlie the "rules" about vampires. It's good that Charlie checked: Some vampires are said to be able to turn into bats or wolves; others can't. Some are said not to cast a reflection, but others do. Holy water is said to repel or kill vampires, while others sip it with a twist of lime. [7 Strange Ways Humans Act Like Vampires ]

Other traditional methods of killing vampires include decapitation and stuffing the severed head's mouth with garlic; a sacred (blessed though not silver) bullet; a stake through the chest (not necessarily through the heart); and so on. (This flexibility, incidentally, is one reason why the vampire genre has been so successful: writers twist old rules and invent new ones to keep the stories fresh.) As it turns out, Jerry's abilities are a mix: he doesn't cast a reflection, nor change into animals, but he can be killed by sunlight and staking at least sometimes.

With so many different claims about vampires, what's a wannabe Charlie or Buffy to do? The most important issue is to know some of the "rules." For example, in some traditions the best way to stop a vampire is to carry a small bag of salt with you. If you are being chased, you need only to spill the salt on the ground behind you, at which point the vampire is obligated to stop and count each and every grain before continuing the pursuit. If you don't have salt handy, some say that any small granules will do, including birdseed and sand. (It is not known if this defense works on vampires who don't exhibit obsessive-compulsive traits.)

In some folklore you're safe in your own home as long as you don't invite the bloodsucker in. This is one of Van Helsing's rules about Dracula in Bram Stoker's classic novel, and that's the case with Jerry the vampire: He can't enter a house without an invitation from someone inside. This is an interesting twist on the idea of a protective magic spell: In this case it's not a witch or wizard casting a spell, but instead an oblivious layperson whose words break an existing spell by inviting the wrong person into the home.

Finding a vampire is not always easy: according to one Romanian legend you'll need a seven-year-old boy and a white horse. The boy should be dressed in white, placed upon the horse, and the pair set loose in a graveyard at midday. Watch the horse wander around, and whichever grave is nearest the horse when it finally stops is obviously a vampire's grave.

So how is a potential vampire slayer to know what you're dealing with, whether to bring a handful of salt, a mirror, or a pure-hearted seven-year-old-boy? There's really no way to know, since most villains won't spell out for you exactly what their limitations and weaknesses are. Your best bet is trial and error. Good luck.

Benjamin Radford is deputy editor of Skeptical Inquirer science magazine and wrote about vampires in his book Tracking the Chupacabra: The Vampire Beast in Fact, Fiction, and Folklore. His Web site is www.BenjaminRadford.com.