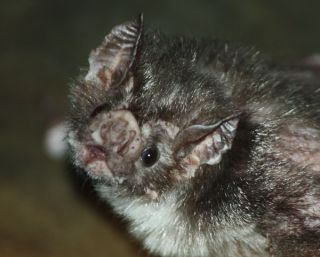 Earlier today (Aug. 12), the Centers for Disease Control and Prevention reported the first known case of a person dying in the United States as a result of a vampire bat bite. Which raises the question: Are the rest of us at risk?

No, not really, says one expert, and for two good reasons.

First of all, the person who died, a 19-year-old from Mexico, wasn't actually bitten in the U.S.; he was bitten in Michoacán, Mexico, and died a few weeks later during a trip to Louisiana (this all happened last August). Also, he didn't die from the bite itself, but from the rabies virus that the bat infected him with.

These are key distinctions, said Gerald Carter, a Ph. D. biology candidate at the University of Maryland and an expert on vampire bat behavior.

First of all – and probably most importantly – vampire bats don't live in the U.S. They exist only in Central and South America – from central Mexico down to around Brazil – where they parasitize cattle and horses, Carter said. There is some research that speculates that as the climate continues to get warmer, vampire bats will extend their range into the United States. Currently, though, there is little to no reason to believe that the bats have already done so. [7 Strange Ways That Humans Act Like Vampires]

Another reason not to worry is that a vampire bat bite isn't really that bad, and they're relatively rare.

"The common vampire bat feeds on large animals, such as cows and horses. Occasionally people get bitten when they sleep out in the open or near cattle," Carter said. "The bite itself is a tiny little wound, often on the toe; people often have trouble finding the wound, and notice it only because they wake up with bloody sheets. The bat takes only a tablespoon of blood, but the wound can bleed a bunch, at least for its size, because the bat's saliva has an anticoagulant in it."

The bite itself is so minor that it won't do you much harm, but Carter stresses that, as with any animal bite, you need to get medical attention and receive a post-contact rabies vaccination. Treatment for any variety of rabies is usually quick and easy in the United States, and so only two or three people die from rabies per year here.

"Vampire bat rabies should not be considered a public health problem in the United States, but it is an important concern for Latin American countries," Carter said. This is mostly because of limited access to rabies vaccinations after one suffers a bite. Still, even in those countries, these are isolated incidents that occur just a few times a year.

"Statistically in the United States, this is not a public health issue at all," Carter said. "In Latin America, it's almost more of a sensational thing, where a few people a year is considered an 'outbreak.' It's not a silent epidemic, because it always gets a lot of press."

Carter laments that stories of vampire bats passing rabies to people stirs up much anti-bat sentiment; people often kill bats over these fears. Many more people die from diseases carried by insects, Carter noted. Ironically, bats are prime predators of those insects.