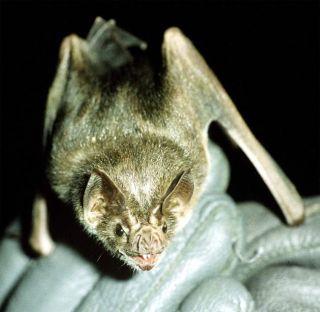 Vampire bats living in Central and South America weigh in at an ounce (30 to 40 grams).
(Image: © Christian Voigt/Leibniz Institute for Zoo and Wildlife Research (IZW))

Vampire bats living in Costa Rica are growing in number as they are sucking their blood meals from cattle rather than wild rainforest mammals, a snack swap based more on accessibility than taste.

A new bat-breath analysis study, published online in the Journal of Comparative Physiology B, reveals how the conversion of rainforests into farms with livestock has resulted in the expansion of vampire bat populations in Latin America. Cow blood could be the reason.

To see if the farmers were right about the overall trend in bats' new diets, Christian Voigt of the Leibniz Institute for Zoo and Wildlife Research in Berlin and colleagues measured isotopes in exhaled carbon dioxide in both captive and wild vampire bats.

“The potential victims of vampires in Costa Rica are either cattle or rainforest mammals such as tapirs and peccaries," Voigt said.

The two animal groups feed on different plants with distinct levels of carbon isotopes. "Therefore, we expected that the stable carbon isotope signature in bat breath would change according to their diet,” Voigt said.

The bat breath showed the chemical marks of cattle, indicating, the authors say, that the last blood meal of the flying mammals almost always was cattle.

The vampire bats don't necessarily prefer bovine blood, the scientists say, but cattle are held in fenced-in open pastures, making them and their blood much more accessible than that of free-roaming rainforest mammals.