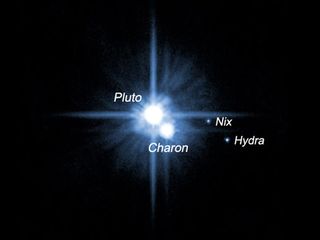 A pair of small moons orbiting Pluto named Nix and Hydra were discovered by NASA's Hubble Space Telescope in 2005. The two moons are roughly 5,000 times fainter than Pluto and are about two to three times farther from Pluto than its large moon, Charon, which was discovered in 1978.
(Image: © NASA)

In June 2005, two small moons were discovered orbiting Pluto, much farther out than its larger moon, Charon. For a year, the discovery team, led by planetary astronomer Alan Stern of the Southwest Research Institute in Boulder, Colo., debated what to call the moons. On June 21, 2006, they settled on Nix and Hydra, the names of a goddess and creature in Greek mythology.

Here's what you need to know about Pluto's little moons, including what we've learned about them in the five years since they were named.

Nix is dimmer and thus thought to be slightly smaller than Hydra, but ranging 2.6 billion to 4.7 billion miles (4.2 billion and 7.5 billion km) away from Earth, the moons are too dim and distant for astronomers to be able to tell exactly how small they are. Astronomers are confident, however, that both moons are smaller than 50 miles (80 km) in diameter.

Nix was the Greek goddess of darkness and night, and the mother of Charon, the ferryman who transported the souls of the dead across the River Styx and into the god Pluto's Underworld. Hydra was a multiheaded serpent killed by Hercules. The names were chosen in part because their combined initials (N and H) stand for the New Horizons spacecraft, which will visit Pluto and its moons, and uncover more about them, in 2015.

The New Horizons robotic spacecraft , launched in 2006, is en route to Pluto and its moons, and will fly by them in four years. The mission was originally planned as an exploration of the last unvisited planet in the solar system. However, since 2006, Pluto has been officially downgraded from a planet to a dwarf planet. Many scientists on the New Horizons team disagree with this reclassification, including Alan Stern, head of the Nix and Hydra discovery team.

Three of a kind

Observations of Pluto's moons through the Hubble telescope have led astronomers to believe that Nix and Hydra formed at the same time as Charon, Pluto's larger moon. They think the moons formed early in the solar system's formation, when a large object from the Kuiper Belt region collided with the dwarf planet, essentially breaking off three pieces. [Read: What If the Moon Had Never Formed? ]

The color of Nix, Hydra and Charon, is, in astronomy-speak, "neutral." This means they are composed of water and ice, which reflect light approximately equally across all wavelengths and thus appear colorless. Pluto, by contrast, is slightly reddish, most likely a result of ultraviolet radiation from the sun breaking up methane that is on Pluto's surface, leaving behind a red, carbon-rich residue.

The moons of Pluto seem to undergo what is called "orbital resonance." This means that their orbital periods the length of time they take to round Pluto are integer multiples of one another, and their gravitational fields align after every few orbital cycles. When this happens, they exert a larger-than-normal gravitational pull, and throw off each other's orbits slightly.

The sizes, reflectivity, temperature and shapes of Nix and Hydra are unknown, as is the nature of their orbital resonance. Many questions will be answered when the New Horizons probe gets up close and personal with the mini-moons in 2015.