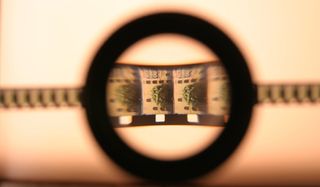 Steven Spielberg has often attributed his career to his childhood use of Super 8 cameras and film, the innovative format that made it easier than ever to shoot home movies.

Before Kodak introduced Super 8 film, making home movies was a pain. People first had to thread old-fashioned 16 mm film into a camera by hand and, on its first pass through the camera, the film was exposed along only half of its width. The camera then had to be opened and the spools flipped so that the unexposed edge of the film could be recorded on during the film's second pass through the camera. After the film was processed, it was slit in half, lengthwise, in order to make two lengths of 8 mm film to fit into a projector.

Super 8 didn't have any of those hassles and provided great image quality, revolutionizing the amateur film genre in the process. Kodak launched Super 8 mm film in May 1965, along with two cameras, the M2 and M4. Super 8 was cheaper and more convenient than the previous, cumbersome Normal 8 format, since all you had to do was pop the film cassette into the camera, take it out after recording and turn it in for processing.

"The advent of the Super 8 cassetted film really helped spawn the home movie rage in the '60s and '70s," Chris Johnson, product manager of Kodak's entertainment imaging division, told Life's Little Mysteries. "It was an easy to use and affordable option for consumers."

To get an idea of what Super 8 movies looked like, recall the opening credits of the late-1980s and early '90s TV show , "The Wonder Years." Each Super 8 cassette packed only enough film to create three minutes of colorful, soft and somewhat grainy footage, but it was enough time for amateur filmmakers to pan around their living rooms or back yards while everyone waved at the camera.

The original Super 8 movies were silent until 1973, when Super 8 film began to be made with a magnetic strip on the side of the film that made it possible to record sound along with the image, according to DeWitt Davis, Kodak's film school liaison.

Despite its widespread popularity, however, Super 8 film was slowly edged out by newer, even more convenient home-recording technology. "The Super 8 then decreased in popularity during the '80s, when the VHS camcorder became the go-to method for making home videos," Davis told Life's Little Mysteries.

Kodak scaled down production and eventually stopped making Super 8 cameras altogether due to a lack of demand, but for those who faithfully continue to use these old cameras for their unique aesthetic quality, Super 8 film can still be found in some photography stores today.