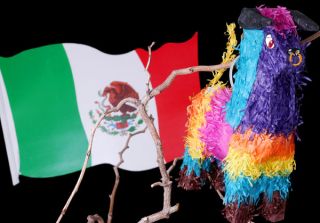 The Mexican holiday Cinco de Mayo, celebrated every May 5, started out as a remembrance of a military victory and has developed into a celebration of Latino heritage and culture that continues to grow in popularity in the U.S.

Here are five fascinating facts about the joyous holiday and how it's celebrated.

1. It began because of a loan default

Cinco de Mayo, which means the 5th of May in Spanish, is often mistaken as a celebration of Mexico's independence -- but that holiday is called Grito de Dolores (or El Grito de la Independencia) and is celebrated on September 16.

Cinco de Mayo is the anniversary of the Battle of Puebla, which took place between the Mexican and the French armies on May 5, 1862. When Mexico stopped making payments on its foreign debt to France in 1861, Louis-Napoléon Bonaparte sent French soldiers to seize portions of Mexico and obtain the money owed by force.

At Puebla -- approximately 80 miles east of Mexico City -- 4,000 or so poorly-equipped Mexican soldiers went up against about 6,000 French soldiers led by the French Commander Charles Ferdinand Latrille. Under General Ignacio Zaragoza, the Mexican forces managed to kill about 1,000 French soldiers and caused the rest to retreat to Mexico's Gulf coast.

In Mexico, Cinco de Mayo is a regional holiday and mainly celebrated with massive parades in the state and city of Puebla. The holiday is also observed with festivities in its neighboring areas, including Veracruz and Mexico City, but isn't commemorated throughout all of Mexico the way that Grito de Dolores is.

In America, Cinco de Mayo started to come into vogue in the 1940s, during the rise of the Chicano (or Mexican American) movement, according to TIME magazine. Currently, Cinco de Mayo is actually more widely celebrated north of the border than it is south of the border. The holiday is observed throughout the U.S. with parades, festivals and Cinco de Mayo-themed parties.

3. The world's largest Cinco de Mayo event is in California

Held in Los Angeles, Calif., the Festival de Fiesta Broadway -- named after the street it takes place on -- is the largest Cinco de Mayo event in the world, attracting more than 600,000 people with its colorful array of Mexican food, music and dancing. Every year, 24 square blocks of downtown Los Angeles are barricaded off to make room for the event, which will be held on May 8 this year so that crowds will be able to enjoy the festivities during the weekend.

An average of 7,000 people attend the Cinco de Mayo festival in Chandler, Ariz., and although it's not as big as the Festival de Fiesta Broadway, this fiesta has its own unique flair: what it lacks in size, it makes up for in … Chihuahuas. Lots and lots of Chihuahuas .

"This festival is known for its Chihuahuas," Alberto Esparza, an official representative for the city government-sponsored event, told Life's Little Mysteries. "We have a Chihuahua parade, as well as Chihuahua races and pageants."

The race consists of 150 purebred Chihuahuas and takes place on a tiny track set up especially to accommodate the small breed. After the race winners are announced, the "king and queen coronation" takes center stage. The king and queen Chihuahuas are judged based on who is the best dressed, has the best temperament and is the most fashionable. The winners receive a medal and royal cape.

5. The Battle of Puebla is reenacted

Every year, the Battle of Puebla is reenacted by the citizens of Puebla, Mexico, during their Cinco de Mayo festival. Participants dress up in 19th century military garb and carry machetes and old-fashioned rifles. Those representing the French soldiers carry knapsacks with wine bottles sticking out of them, and women dressed in long skirts and flowery hats represent the soldaderas, or "female fighters" that cooked and cared for the Mexican army.

During the mock battle, rifle shots ring out and cannon blasts roar until the Mexican and French generals meet face-to-face for a dramatic sword fight finale. (The Mexican general always wins, of course.) The Battle of Puebla is also reenacted in several parts of the U.S., including San Diego's Old Town and Heritage Park in San Diego, Calif.