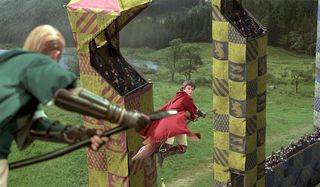 In the Harry Potter universe, quidditch is a game played by wizards and witches. Each team consists of seven players, each flying on a broomstick. Players attempt to throw soccer-ball-size balls, called quaffles, through three large hoop goals at either end of the pitch; a goal is worth 10 points. One player on each team is designated the seeker, and it is his or her job to capture the golden snitch, a golden winged ball the size of a walnut that zips around the playing field of its own volition. The team that catches the snitch earns 150 points, which, because each match goes to 150, generally ends the game.

In the nonfiction universe, however, we don't have flying brooms or snitches, so folks who really want to play quidditch have improvised a version of the game called muggle quidditch. (Muggle is the term for a person without magical powers.) The rules of this game vary from league to league yes, there are leagues but they generally follow the same rules as the fictional game. There are a few differences, though. Quaffles are often replaced with dodge balls and the goals are made of hula hoops mounted on PVC pipes. The snitch is usually a neutral player, dressed in gold, who enters the field of play every so often and runs around trying to avoid being tagged by either team's seeker. Oh, and no flying, but the players must straddle a broom as they scamper around.

For the sake of argument, let's say that, yes, muggle quidditch counts as quidditch. Now, is it a sport? Well, it has just about everything generally required of a sport: Well-defined rules, teams, leagues and competitions. There's even a Quidditch World Cup featuring 46 teams from all around the planet being held this weekend in New York City. And judging from gameplay videos posted online, muggle quidditch does appear to require the skillful, strenuous athletic performance expected from a sport.

Itâ??s not football , for sure, and it's not in the Olympics (although, table tennis is an Olympic sport, so perhaps that's not the best determining factor). But it's as much a sport as ultimate Frisbee. So, yeah, quidditch is a real, although still very niche, sport. Now, that doesn't mean that you have to take it seriously.