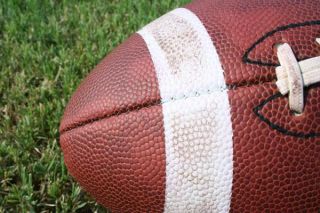 Every coach of American-style football preaches it, but few players learn: If there is a fumble and the ball is loose on the field, don't try to pick it up! Just fall on it. Instead, players envision a flash of glory in the end zone, reach down to scoop up their prize, only to be fooled by a strange bounce of the ball just out of their reach.

It's almost like the creators of American football imagined this very scenario and designed the ball's shape to frustrate these over-confident players. The truth is that the American football's unique contour is an evolution of history more than design.

Technically shaped, at least roughly, as a prolate spheroid, the football's nickname of pigskin explains a lot of its history. In the early days, before Charles Goodyear made better use of rubber, balls for early rugby, then football games were made from inflated pig bladders. They were relatively round, durable and in plentiful supply. Later versions covered them in a leather skin, stitched together by laces. Those laces are still on today's balls, even though they're not needed for closure. Players use the laces to better grip the ball.

Even when pigs were spared in favor of rubber versions in the late 1800s, the early versions were difficult to blow up manually. Their ultimate shape varied from game to game as the bladders were inflated. Moving into the new century, the quality control improved, but the watermelon shape was retained.

Over the years, as production methods matured, the ends of the ball became even more pronounced. With all leagues promoting the forward pass, being able to grip the ball with one hand, as well as throw a spiral pass, has ensured the current shape will be retained. [The First Forward Pass in Football]

Today, the ball size and shape have been standardized. For both NFL and NCAA balls, the dimensions are 11 to 11 1?2 inches along the long axis with a circumference around the middle of the ball at 28 to 28 1?2 inches and around the pointed ends of 20 3?4 to 21 1?4 inches, and weighing 14 to 15 ounces. A rubber bladder is surrounded by pebble-grained leather with the characteristic laces to provide better grip.

Footballs used in college and high schools have white lines painted on each end; high school balls have lines all the way around while college balls paint just the top half. These lines were added with the advent of night games to provide better visibility of the ball in flight when playing under the lights.

So, the football itself still has the ability to change a game. As the longtime college coach Lou Holtz said, The man who complains about the way the ball bounces is likely to be the one who dropped it.