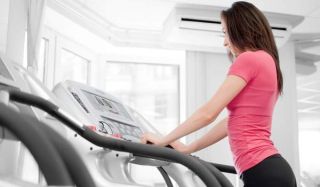 Women should use a different formula for calculating their maximum heart rate from the one men use, new research suggests.
(Image: © Natalie Shmeleva | Dreamstime)

Women are not the same as men (you read it here first!). But that rather obvious fact has eluded the fitness industry for many years when it comes to determining the optimal exercise heart rate range for women. The time-honored formula to find your maximum heart rate to subtract your age from 220 has been assumed to be appropriate for both genders. But now, researchers from Northwestern University have shown that method is inaccurate for women, and have proposed a new calculation.

In a 16-year study of almost 5,500 healthy women aged 35 to 93, researchers found a link between abnormal heart rate responses during exercise and an increased risk of heart attack.

They also discovered that the standard maximum heart rate formula set the bar too high for women.

"Now we know for the first time what is normal for women, and it's a lower peak heart rate than for men," said study researcher Dr. Martha Gulati, assistant professor of medicine and cardiology at Northwestern. "Using the standard formula, we were more likely to tell women they had a worse prognosis than they actually did."

The new formula that the researchers suggest is 206 minus 88 percent of a woman's age.

So, for a 40-year-old woman, the traditional formula would have set 180 beats per minute as her maximum heart rate. Most trainers advise exercising somewhere between 65 and 85 percent of this maximum, so her target zone would be between 117 and 153 beats per minute.

Using the new formula, the same woman would find a maximum of 171 beats per minute, which would lower her exercise range to between 111 and 145 beats per minute. It may seem like a small difference, but for some women who just weren't able to stay in the old range, it may be a welcome relief to know that a lower heart rate while exercising is still improving their health.

"Women are not small men," Gulati said. "There is a gender difference in exercise capacity a woman can achieve. Different physiologic responses can occur."

The new recommendation will also help physicians decide if women are having an abnormal response to exercise. For example, focusing on the old range may have misguided a heart stress test.

"If it's abnormal, that's a marker for a higher risk of death," Gulati said. "Maybe we need to talk about whether you exercise enough and what we need to do to get it into the normal range."