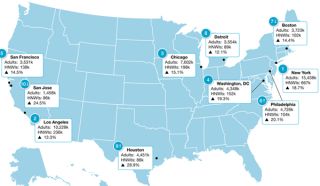 Boasting the highest number of millionaires of any U.S. city, New York City should perhaps change its nickname from "The Big Apple" to "The Golden Apple."

The New York metropolitan area has 650,000 high-net worth individuals (HNWIs), or people with $1 million or more in investible assets (which excludes their primary residence, collectibles, consumables and consumer durables), according to the 2010 Metro Wealth Index. The index, constructed by the Paris-based consulting firm Capgemini, annually tracks affluent households in hundreds of cities nationwide.

According to the numbers, New York City continues to top the index and has more high net worth individuals than the next top three cities Los Angeles, Chicago and Washington, D.C. combined.

Interestingly, the index shows that despite the recession, the number of HNWIs in the ten cities that have the most of them increased by 17.5 percent from 2008 to 2009, the highest growth rate in the last four years. The number of HNWIs in New York City grew by 18.7 percent during that time.

How did the Empire City manage to have such a millionaire boom in the midst of these dreary economic conditions ?

The use of U.S. taxpayers' money to fund bank bailouts certainly helped those on Wall Street , Cornell University professor of economics Robert H. Frank noted in a blog post about the 2010 index in The Wall Street Journal, adding that finance, technology and oil still remain the main sources of wealth in the U.S.

The numbers below show the HNWI population in the five U.S. cities that have the most of them, as well as the percent by which each city's number of millionaires increased between 2008 and 2009.