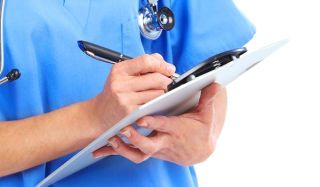 It is unclear why doctors where colored scrubs.
(Image: © Kurhan | Dreamstime)

Scrubs used to be white — the color of cleanliness. Then in the early 20th century, one influential doctor switched to green because he thought it would be easier on a surgeon’s eyes, according to an article in a 1998 issue of Today’s Surgical Nurse. Although it is hard to confirm whether green scrubs became popular for this reason, green may be especially well-suited to help doctors see better in the operating room because it is the opposite of red on the color wheel.

Green could help physicians see better for two reasons. First, looking at blue or green can refresh a doctor’s vision of red things, including the bloody innards of a patient during surgery. The brain interprets colors relative to each other. If a surgeon stares at something that’s red and pink, he becomes desensitized to it. The red signal in the brain actually fades, which could make it harder to see the nuances of the human body. Looking at something green from time to time can keep someone’s eyes more sensitive to variations in red, according to John Werner, a psychologist who studies vision at the University of California, Davis.

Second, such deep focus on red, red, red can lead to distracting green illusions on white surfaces. These funky green ghosts could appear if a doctor shifts his gaze from reddish body tissue to something white, like a surgical drape or an anesthesiologist’s alabaster outfit. A green illusion of the patient’s red insides may appear on the white background. (You can try out this “after effect” illusion yourself.) The distracting image would follow the surgeon’s gaze wherever he looks, similar to the floating spots we see after a camera flash.

The phenomenon occurs because white light contains all the colors of the rainbow, including both red and green. But the red pathway is still tired out, so the red versus green pathway in the brain signals “green.”

However, if a doctor looks at green or blue scrubs instead of white ones, these disturbing ghosts will blend right in and not become a distraction, according to Paola Bressan, who researches visual illusions at the University of Padova in Italy.

So, although doctors trot down the street these days in a rainbow of patterned and colored scrubs, green may be a doctor’s best bet.