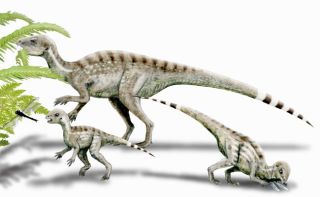 Dinosaurs are keeping mum on exactly how many birthdays they celebrated back in the day.

But scientists have come up with clever ways to guess the lifespans of the ancient reptiles.

To determine how long and how fast Tyrannosaurus rex grew, paleontologist Mark Norell at the American Museum of Natural History and colleagues counted rings in some of the dinosaurs' ancient bones. Similar to tree rings, each ring in a dinosaur bone marks another year of growth.

“We found on the basis of seven specimens that T. rex reached adult size at 19 years of age,” said Norell. “The oldest T. rex that we could find was the specimen named Sue at the Field Museum in Chicago, which was 28 years old. T. rex grew very fast — for a four-year stint, it was putting on more than 5 pounds per day.”