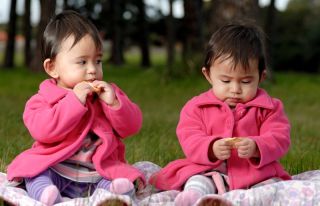 The famous identity-swapping tricks played by twins have met their match. Sporting the same DNA, and thus matching physical features, identical twins can get away with duping friends and family. But when it comes to swindling more sophisticated identification tools, such as fingerprint testing, the carbon copies aren't so savvy.  That's because genes don't tell the whole story of the corduroy-like surface adorning our fingertips. Instead, the fine details of ridges, valleys, and swirls that define our fingerprints are influenced by random stresses experienced in the womb. Even a slightly different umbilical cord length changes your paw print. And, so far the crime solvers haven't come across any two identical digits.