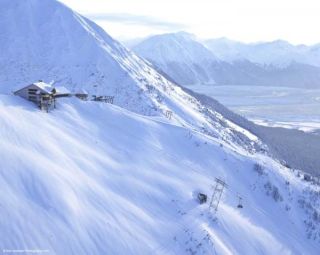 A blizzard is a storm with dense, blowing snow characterized by low visibility and lasting at least three hours.
(Image: © Ken Graham Photography.)

The term "blizzard" is often tossed around when big winter storms blow in. But the National Weather service has an official definition of blizzard:

A blizzard is a storm with "considerable falling or blowing snow" and winds in excess of 35 mph and visibilities of less than 1/4 mile for at least 3 hours.

While blizzard conditions may occur for shorter periods of time, the weather service is particular about its warning system:

Blizzard conditions often develop on the northwest side of an intense storm system, meteorologists explain. The difference between the lower pressure in the storm and the higher pressure to the west creates a tight pressure gradient, or difference in pressure between two locations, which in turn results in very strong winds.

The strong winds blow falling snow and pick snow up from the ground, cutting visibility and creating big snow drifts.

Where did the term "blizzard" come from?

It had been used to describe a canon shot or a volley of musket fire. It first showed up to describe a snowstorm in an Iowa newspaper in the 1870s, according to the weather service.

Blizzards are most common in the upper Midwest and Great Plains, but they can occur anywhere strong snowstorms strike.

It is not uncommon in the Midwest to have wind chills below minus 60 degrees Fahrenheit during blizzard conditions. Exposure to such low wind chill values can result in frostbite or hypothermia, so officials caution against going outside at all during a blizzard.