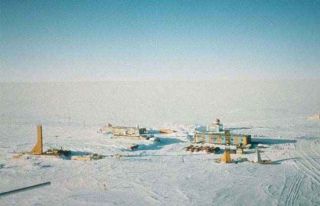 The Vostok site in Antarctica initially was chosen by the Soviet Union for research aimed at drilling deep into ancient ice. French and, later, American scientists began to participate in coring activities at the site. This panoramic photo of Vostok Station shows the layout of the camp. The striped building on the left is the power station while the striped building on the right is where researchers sleep and take meals. The building in the background with the red- and white-striped ball on top is the meteorology building.
(Image: © Todd Sowers, LDEO, Columbia University)

During the southern hemisphere winter of 1983, temperatures at Russia's Vostok research station in Antarctica plunged to a frighteningly cold minus 128.6 degrees Fahrenheit, which is 54 degrees colder than the winter average there and the coldest temperature ever recorded on Earth.

Scientists have now figured out why it got so cold.

An explanation for why the mercury plunged precipitously during a 10-day period in July of 1983 (winter in Earth's Southern Hemisphere) to that minus 128.6 F (minus 89.2 degrees Celsius) temperature has long eluded scientists.

But scientists at the British Antarctic Survey (BAS) and the Arctic and Antarctic Research Institute (AARI) in Russia were able to solve the mystery with a computer model developed to simulate the future evolution of the Antarctic climate, along with weather charts and satellite imagery of the area.

They found that relatively warm air that normally flows over the Southern Ocean onto the high Antarctic plateau almost came to a halt during this period. A flow of cold air circling Vostok was preventing the mixing of this warmer air from lower latitudes, isolating the station and causing near optimum cooling conditions. Adding to this was the absence of a heat-trapping cloud cover and the presence of a layer of tiny particles of ice suspended in the air (known as diamond dust), allowing more heat from the continent’s icy surface to be lost to space.

The findings show just how extreme Mother Nature can be.

"Distinguishing between natural variability and human induced changes to the Earth's atmospheric climate is at the heart of our research, and we wanted to understand why this 'normal' weather system was thrown out of balance so severely," said team member John Turner at the BAS. "Our findings indicate that this was a natural event, but this is an important reminder of just how extreme Earth’s natural events can be and that we must always consider the potential for such anomalies to occur."

Turner and his colleagues think that the same combination of circumstances lasting over a longer period of time could make the thermometer at Vostok dip even further, down to minus 141 F (-96 C).

The team hopes understanding this cold event will help them better predict how the Antarctic continent will respond to global warming.

"By appreciating that such possibilities can occur and in turn striving to understand the processes that cause them we are better equipped to make predictions for how the planet might react to future changes in polar atmospheric climate" Turner said.