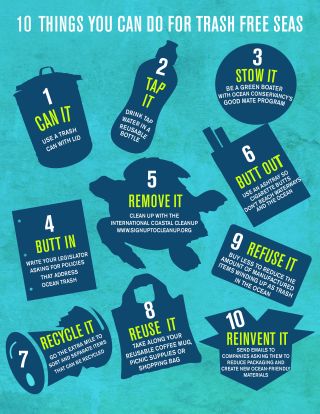 A global effort to clean up coasts and waterways netted a staggering 10 million lbs. of trash, a conservation nonprofit announced today (May 14).

The Ocean Conservancy's International Coastal Cleanup took place on Sept. 15, 2012. The United States was the top participant, but countries all around the world took part. Volunteers pulled the 10 million lbs. of trash — equivalent to the weight of 41 blue whales — from 17,719 miles (28,516 kilometers) of global waterways and beaches.

Among the pieces of trash removed were more than 2 million cigarette butts and filters, and more than 1 million plastic bags.

"Whether it's the smallest bottle cap to the weirdest finds, like the 117 mattresses collected, every piece of trash affects the health of our ocean," Nicholas Mallos, the Ocean Conservancy's marine-debris specialist, said in a statement.

The International Coastal Cleanup is in its 27th year. More than 550,000 people around the world volunteered for the effort in 2012. They collected the second-highest total number of items since 1986 and the third-highest total weight of garbage since that year.

Mattresses aren't the only odd objects that end up littering waterways. The volunteers found 4,159 candles; 40 lottery tickets; 2,492 baseballs; a variety of tennis balls and other sports balls; and 236 toothbrushes.

Hurricane Sandy and the 2011 Japanese tsunami have increased marine debris on both the East and West coasts of the United States. [Photos: Hawaii's Beaches Marred By Trash]

The most common items littering the seas, however, are the daily disposable goods most people take for granted. Cigarettes, food wrappers, plastic beverage bottles and plastic bags were the most common pieces of trash found, with more than 1 million of each discovered. Caps and lids came in fourth, with nearly 1 million recovered.

Volunteers plucked 692,767 forks, spoons and other utensils from cleanup sites, as well as more than 611,000 straws and plastic drink stirrers. Glass beverage bottles and drink cans were the eighth and ninth most-discarded items, and paper bags rounded out the top 10, with 298,332 found.

In the past 27 years, the Ocean Conservancy's cleanups have removed 57 million cigarette butts and more than a million diapers from coastal areas. Volunteers have also rid the oceans of almost 10 million plastic bags.

Beach-going litterers shoulder some blame for marine trash, but everyone is culpable, no matter where you live, the Ocean Conservancy said. For instance, a plastic bag that blows from a trash can into a storm drain can travel miles through waterways to reach the ocean. Reducing consumption of disposable goods can stop the trash cycle before the garbage gets to the seas, the agency said.

"From product creation to disposal, we must tackle trash at every point," Mallos said.

The next International Coastal Cleanup is scheduled for Sept. 21. Sponsors include the U.S. Environmental Protection Agency, the National Oceanic and Atmospheric Administration, Dow Chemical and Coca-Cola.