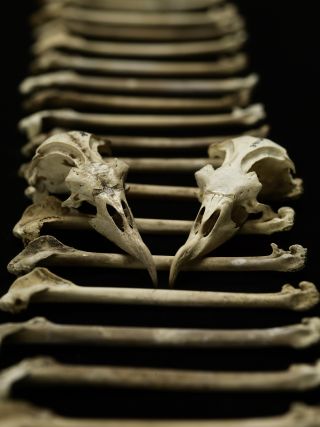 Hawaiian petrels are now listed as endangered in the United States, but they are said to have darkened the skies of Hawaii for thousands of years. The birds' surprisingly well-preserved fossil record doubles as a time capsule for scientists studying fish populations of the past.

The gray-and-white, tube-nosed seabirds spend most of their lives searching for food in the open waters of the Pacific, but they come ashore to breed in burrows and caves. If they happen die at these on-land locations, the petrels' bones are preserved for a long time.

Researchers with the Smithsonian Institute have amassed a collection of more than 17,000 ancient Hawaiian petrel bones, dating back to 4,000 years ago. By comparing the bone chemistry of these specimens to that of modern samples, scientists can see how the species' diet has changed — and by extension, how fish availability in the open seas has been transformed over the years.

The biggest change seems to have occurred only in the past several decades with the rise of commercial fishing, the researchers say.

"Our bone record is alarming because it suggests that open ocean food webs are changing on a large scale due to human influence," study researcher Peggy Ostrom, a zoologist at Michigan State University, said in a statement. "Our study is among the first to address one of the great mysteries of biological oceanography — whether fishing has gone beyond an influence on targeted species to affect nontarget species and potentially, entire food webs in the open ocean."

Isotope ratios can tell researchers which level of the food chain the birds rely on. Bigger ratios of nitrogen-15 and nitrogen-14 isotopes in the bones mean the birds are eating bigger prey. (Isotopes are versions of elements that have differing numbers of neutrons in their nuclei.)

The petrels apparently had high isotope ratios between 4,000 and 100 years ago, but then those numbers began shrinking. The team believes the species may have shifted to a diet of smaller fish and other prey as industrial fishing began extending to the open seas around the 1950s.

The diet shift has also been associated with population decreases among Hawaiian petrels. According to some estimates, there are only about 15,000 of the birds left in the wild, distributed in isolated breeding colonies on Kauai, Lanai, Maui and Hawaii Island.

Besides dwindling food resources, the seabirds face other big threats. Among them: feral cats. Another group of scientists recently installed video cameras to monitor petrel burrows in Hawaii. The footage showed that feral cats were preying on most of them.

The new study, funded in part by the National Science Foundation, was detailed today (May 13) in the Proceedings of the National Academy of Sciences.