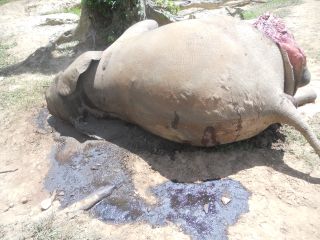 Populations of forest elephants have plummeted by 62 percent over the past 10 years, according to the World Wildlife Fund.
(Image: © WWF)

In a grim karmic twist, a suspected poacher illegally hunting African elephants was trampled to death by his prey, according to news reports.

The bloodied remains of Solomon Manjoro were found by rangers in Charara National Park near Lake Kariba in northwestern Zimbabwe, the country's Sunday Mail reported. Authorities say Manjoro and his accomplice, Noluck Tafuruka, 29, went into the park with two rifles looking for elephants when one of the animals apparently attacked. Tafuruka and another man, Godfrey Shonge, 52, were reportedly arrested in connection with the incident.

An international ban on the ivory trade was established in 1989, but poachers still strip elephants of their ivory tusks to sell on lucrative global markets, with a high demand coming from East Asia. The Wildlife Conservation Society estimates that some 25,000 African elephants are killed each year. Last week, a group of armed poachers raided a protected sanctuary in the Central African Republic and killed at least 26 elephants.