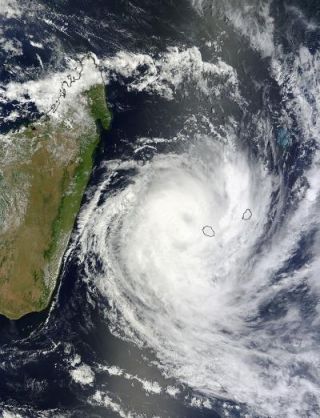 Two NASA satellites caught a bird's-eye view of Tropical Cyclone Dumile as it barreled over the Indian Ocean islands of La Reunion and Mauritius on Thursday (Jan. 3).

The Moderate Resolution Imaging Spectroradiometer (MODIS) instrument aboard NASA's Terra satellite took a picture of Dumile at 1:50 a.m. EST (0650 UTC) when its center was about 98 miles (157 kilometers) northwest of Reunion Island and Mauritius, according to a NASA release. The strongest thunderstorms within the cyclone's swirling structure appeared to be to the southwest of the storm center, NASA said. Reunion Island and Mauritius lie to the east of the much larger island of Madagascar.

The coldest, highest clouds and heaviest rainfall were found in a ring around the storm's center visible in two infrared images taken by the AIRS instrument aboard NASA's Aqua satellite at 4:36 a.m. EST (0936 UTC) on the same day. This infrared imagery also showed that Dumile's central eye had closed off. The collapse of a tropical cyclone's eye typically means the storm is weakening.

The Terra satellite also snapped an infrared picture of the "birth" of Tropical Depression Sonamu off the Philippines yesterday. It is the first tropical depression of 2012 for the western North Pacific Ocean. It currently has maximum sustained winds of about 29 mph (46 kph) and is expected to struggle to intensify as it moves westward over Palawan (an island province of the Philippines) and into the South China Sea, according to a NASA release.

The latest update for Dumile from the U.S. Joint Typhoon Warning Center has the center of the storm located about 300 miles (480 km) south-southwest of La Reunion and projects that it will move to the southeast and weaken into an extratropical storm. Extratropical cyclones are fueled by the temperature differences in the atmosphere, whereas tropical cyclones are fueled by the energy released during cloud and precipitation formation in warm tropical air.

Tropical cyclones are the same phenomenon as hurricane and typhoons — different names are used in different ocean basins. The southwest Indian Ocean area sees 9.3 storms in a season on average, according to the Hurricane Research Division of the U.S. National Oceanic and Atmospheric Administration. Storm names are set in lists by the World Meteorological Organization and use names found in languages used in the particular region.