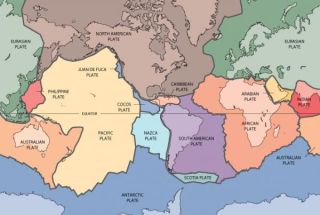 You probably know that the Earth's crust is broken up into huge tectonic plates that slide under, over and past each other, slowly building mountains, forming new oceans and triggering earthquakes. But do you know how long all of that has been going on?

Scientists aren't really sure, either.

Now, after studying ancient rocks in southern West Greenland, one team of researchers says that modern plate tectonics, with its subduction zones, spreading centers, earthquakes and all the other features we're familiar with, probably started about 3.2 billion years ago (the Earth is about 4.6 billion years old). Before that, a much different set of processes shaped the Earth's surface, the researchers say.

"There have been several very different views on when modern-like plate tectonics started," said Tomas Naeraa, a researcher at the Geological Survey of Denmark and Greenland who led the study. "It was clear from our data that there was a transition 3.2 billion years ago, and rocks formed after that could be related to plate tectonic processes."

When and how plate tectonics started is a key question among geologists. Some researchers think it started more than 4 billion years ago, and others say it started only about 1 billion years ago. That's a big range, and the uncertainty stems from the fact that it's simply hard to find well-preserved ancient rocks.

To find rock samples for this study, Naeraa went to Greenland.

"Southern West Greenland contains the best preserved, and some of the oldest examples, of crustal rocks known on Earth," Naeraa told OurAmazingPlanet. "This makes the area excellent for studying geological processes during the earliest history of Earth."

They measured hafnium isotopes — atoms of the same element that have different numbers of neutrons in their nuclei — in the rocks to figure out how long each sample had been part of the Earth's crust. As rocks on the surface are melted and recycled, the proportions of hafnium isotopes change. The hafnium patterns in the older rocks, those that are more than 3.2 billion years old, are different from the patterns in younger rocks, Naeraa found.

The different isotope patterns likely arose because plate tectonics kicked in around that time, Naeraa said.

Before then, vertical plumes of very hot magma in the mantle probably brought material straight up to the surface of the Earth to form the first bits of continental crust, he said. Today, the Hawaiian Islands are forming above a similar mantle plume.

Gradually — between about 3.5 and 3.2 billion years ago — the Earth's interior began to run low on heat-generating radioactive elements, the mantle cooled down and there were fewer hot magma plumes. Stable convection cells formed in the mantle and started driving plate movements and subduction, and plate tectonics began to shape the Earth's surface, the researchers believe.

Since then, most new crust has made its way to the surface of the Earth at spreading centers and subduction zones, Naeraa said. One example is the Mariana subduction zone, where the Mariana island arc has formed, and the Mariana Trench — the deepest spot in the ocean — is located.

What it boils down to, Naeraa said, is that the early Earth was a very different place from the planet we know today.

"Plate tectonics as we know it on Earth today is not a good model for understanding processes in the Earth's earliest history," Naeraa said.

His team's findings were published May 31 in the journal Nature.