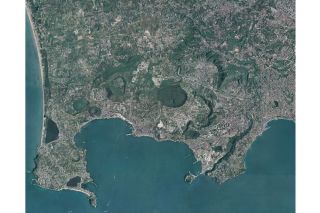 A super-eruption of an Italian volcano that may have played a major role in the Neanderthals' fate was apparently even larger than thought, new research suggests.

For the new study, scientists investigated the Campi Flegrei caldera volcano in southern Italy. About 39,000 years ago, it experienced the largest volcanic eruption that Europe has seen in the last 200,000 years. This super-eruption may have played a part in wiping out or driving away Neanderthal and modern human populations in the eastern Mediterranean.

To learn more about this outburst, scientists measured 115 sites for the ash layer it laid down, known as Campanian Ignimbrite. They next analyzed this data with a 3D ash-dispersal computer model.

The researchers discovered the super-eruption behind the Campanian Ignimbrite would have spewed 60 to 72 cubic miles (250 to 300 cubic kilometers) of ash across 1.4 million square miles (3.7 million square km). This is twice to triple the previous estimate of the volume of ash spouted by the eruption.

These findings, detailed online May 30 in the journal Geophysical Research Letters, suggest the super-eruption would have spread up to 990 million pounds (450 million kilograms) of poisonous sulfur dioxide into the atmosphere. This air pollution would have cooled the Northern Hemisphere, driving down temperatures by 1.8 to 3.6 degrees Fahrenheit (1 to 2 degrees Celsius) for two to three years, enough to have severe effects on the environment. (For comparison, the air pollutants generated by the 1991 eruption of Mount Pinatubo reduced global temperatures by about 0.9 degrees Fahrenheit (0.5 degrees Celsius).

The researchers noted that the Campi Flegrei super-eruption took place in what was already an especially cold, dry period in the last Ice Age. "The eruption would have made conditions even worse for the Neanderthal and modern human populations," researcher Antonio Costa, a volcanologist at the University of Reading in England and the Italian National Institute of Geophysics and Volcanology in Naples, told OurAmazingPlanet.

Fluorine-laden ash from the eruption that later became incorporated into plant matter eaten by these hominids could have also potentially caused a condition known as fluorosis, which can lead to eye, tooth and organ damage. In addition, sulfur dioxide, fluorine and chlorine emissions from the volcano would have generated intense acid rain downwind of the volcano.

The researchers plan to look at other super-eruptions, such as the Toba outburst about 75,000 years ago, "which was much larger than the Campanian Ignimbrite," Costa said. "We can also study the Yellowstone super-volcano."