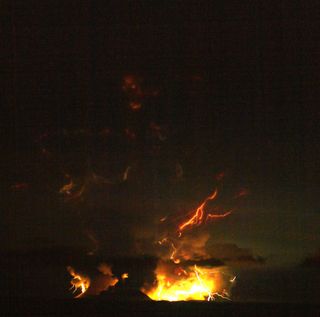 The searing hot plumes of ash rising above explosive volcanic blasts often burst with lightning storms, the largest of which rival the most powerful thunderstorms known on Earth. Now the most complete and detailed measurements of volcanic lightning are yielding insights into the roots of these electrical discharges, and could potentially help avert threats to global air traffic.

Lightning is often seen crackling in the plumes of explosive volcanic eruptions, such as thatof the Icelandic volcano Eyjafjallajökull. However, active volcanoes are often quite remote from civilization and their outbursts are sudden and unpredictable, which is why scientists have rarely investigated the origins of this lightning in detail. Even when scientists can get a close view of eruptions, the intensely murky nature of volcanic clouds hides most of their lightning from view.

Fortunately, due to seismic activity two months in advance of the explosive eruption of Alaska's Mount Redoubt in 2009, scientists were able to install four portable lightning mapping stations around the volcano to monitor lightning during the entire sequence of an eruption for the first time.

The instruments were deployed in wintry conditions in late January and early February 2009, along the west coast of the Kenai Peninsula, 50 miles (80 kilometers) east of Mount Redoubt. The 10,200-foot-tall (3,100 meters) volcano, located at the northeastern end of the Aleutian volcanic arc, erupted in March and April 2009. [Biggest Eruptions in History]

"Setting up equipment in subzero temperatures, pounding stakes through frozen ground, was tough," recalled researcher Sonja Behnke, an atmospheric physicist at the New Mexico Institute of Mining and Technology at Socorro.

Lightning releases a succession of bursts of very-high-frequency radio emissions. The array of stations the researchers set up imaged the lightning in the murky plume by monitoring these outbursts.

"One of the most surprising things about our results from Redoubt was just the amount of lightning we saw during each explosive eruption," Behnke said.

The scientists found that at the beginning of a volcanic explosion, lightning was very intense and essentially continuous, with at least 300 flashes per minute during the largest explosions. Afterward, lightning became larger in extent and duration but increasingly intermittent over time, with flashes separated by minutes of inactivity toward the end of this phase and occurring progressively downwind of the volcano in the drifting plume.

Their data reinforced past models of how scientists think volcanic plumes become strongly electrified. During the explosive phase, electrical discharges were seen close to the vent of the volcano and concurrent with the volcanic explosion, suggesting volcanic ash was already highly electrified as it left, getting its charge from magma fracturing within the volcano. Later, when it came to lightning in the plume far downwind of the vent, the same mechanisms that electrify thunderstorms might apply — for instance, friction between particles in the cloud.

The largest explosions generated clouds that reached altitudes of 6.2 to 11.8 miles (10 to 19 km) that subsequently drifted downwind, with lightning extending from 6.2 to 93 miles (10 to 150 km) into the downwind plume.

"We compared the amount of lightning during each explosive event to the maximum altitude of the plume and found that, in general, the higher the plume, the more lightning there was," Behnke said.

The fact the amount of volcanic lightning was linked with plume height, a factor linked with an eruption's magnitude, suggests these flashes could shed light on the strength of an eruption, something that can be hard to estimate for remote volcanoes.

"To be more certain of that we would need to compare the amount of lightning with other measures of eruptive vigor, like the amount of ash erupted, from several volcanoes," Behnke said. [10 Wild Volcano Facts]

Lightning mapping arrays could help confirm that eruptions are occurring when clouds obscure satellite images of a volcano.

"It would be great to set up a semipermanent network with 10 or 12 stations, similar to how we do thunderstorm research, in a place like Iceland, where there are many active volcanoes and where there is already a robust network of volcano monitoring tools in place," Behnke said.

Confirming whether an eruption has occurred could help save lives. Redoubt lies on one of the busiest cargo and passenger airplane routes in the world, and during its 1989-1990 eruption, a large commercial jetliner almost crashed when it flew through an ash cloud from Redoubt and all its engines temporarily shut down. Arrays that detect volcanic lightning could help prevent such incidents, Behnke said.

The scientists detailed their findings in the May 15 issue of Eos, an Earth sciences newsletter published by the American Geophysical Union.