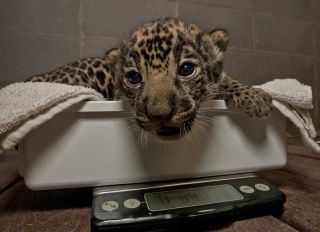 The San Diego Zoo recently welcomed two bundles of cuteness in the form of twin jaguar cubs born on April 27, the first jaguars born at the zoo since 1989.

One of the 12-day-old cubs recently took a turn on a zoo scale during a check-up.

This tiny cub, which weighs 4.2 pounds (2 kilograms), is still too young to get on and off the scale on its own. The two unnamed siblings will remain in the den for a couple of months until they are able to walk outdoors on their own. Keepers have yet to determine the sex of the cubs.

Although these two young cubs may look adorable, females can grow to 70 pounds (32 kg) while males can reach 120 pounds (54 kg). Jaguars are the largest of the big cats that live in the Western Hemisphere and the third largest any cat in the world. The South American native word for jaguar, yaguara, means "animal that kills in a single bound."

Demand for the jaguar's beautiful spotted fur is one of the reasons this species is an endangered species. In addition, loss of habitat and the human-animal conflict have reduced populations of jaguars throughout their range from North America through South America.