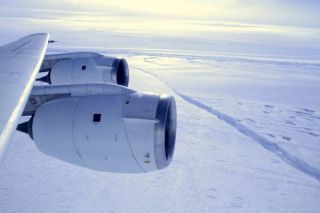 A new video takes viewers on a stunning ride through a giant and ever-growing canyon of Antarctic ice that marks the birth of an enormous iceberg.

The Pine Island Glacier ice shelf in western Antarctica is in the process of "calving" a massive iceberg that, when it breaks away, will have an area of about 350 square miles (900 square kilometers) — 15 times the size of Manhattan. A new NASA video provides a hair-raising view of the jagged-edged fissure up close.

The animation uses data collected during late 2011 research flights over the Antarctic ice, when the crack was first discovered. At the time, the 18-mile (28-km) rift was about 180 feet (55 meters) across and 150 feet (45 meters) deep.

A satellite image of the crack snapped in November showed it was visible from space, and still growing.

The recent discovery that the glacier that feeds it has markedly sped up over the last decade has provoked a flurry of research interest. The sudden changes are almost undoubtedly caused by climate change and warming oceans in the region.

The Pine Island Glacier is now one of the fastest moving in Antarctica, and NASA scientists say that every year it is losing ice.

The thinning and increasingly speedy glacier and several of its closest neighbors in West Antarctica are responsible for 7 percent of global sea level rise in recent years.

Glaciers are essentially slow-moving rivers of ice that move frozen water from the continent's interior out to the ocean. If they accelerate, glaciers dump more ice into the sea, raising the ocean in the same way an ice cube dropped into a glass of water pushes the liquid higher.

However, the calving iceberg itself is the result of a cyclical process, not climate change, scientists say.

And although the nascent iceberg is quite large, scientists said its breadth isn't anything out of the ordinary.

In fact, researchers had been expecting the ice shelf to produce a large iceberg sometime soon. The ice shelf last produced large icebergs in 2001 and 2007, and these calving events appear to happen on a roughly decade-long cycle.