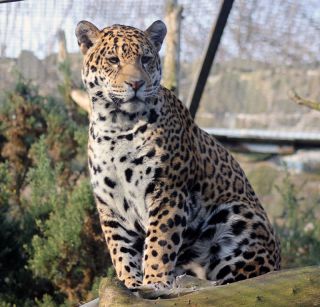 Edinburgh Zoo in Scotland has a new resident: Rica the jaguar.

At one-and-a-half years old, Rica is still a youngster, but in time it is hoped she will form a breeding pair with seven-year-old Mowgli, the zoo's black  male jaguar.

Jaguars are the largest cats in the Americas and are mainly found in the rainforests of the Amazon Basin.

Powerful and athletic cats, they are natural predators and their characteristic spots allow them perfect camouflage to stalk down their prey. When fully grown, jaguars are extremely strong and make excellent swimmers, climbers and hunters.

"Rica is still settling into her new home here at Edinburgh Zoo. She has been a little shy and so far has tended to be more active at night. However we've been noticing that Rica does have quite a playful character, so I'm sure we’ll see more of that as she matures and becomes more confident," carnivore keeper Alison Maclean said in a statement.