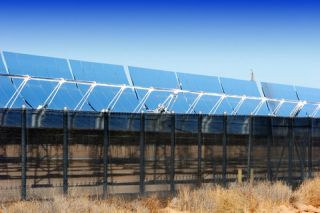 Editor's Note: "The Energy Debates" is a LiveScience series about the pros, cons, policy debates, myths and facts related to various alternative energy ideas. We invite you to join the debate by commenting directly on each article. The Facts The amount of energy from the sun that falls on Earth is staggering. Averaged over the entire surface of the planet, roughly each square yard collects nearly as much energy each year as you’d get from burning a barrel of oil. Solar farms seek to harness this energy for megawatts of power. There are two ways solar power is used to generate electricity. Solar thermal plants — also known as concentrating solar power systems — focus sunlight with mirrors, heating water and producing steam that drives electric turbines, while photovoltaic cells directly convert sunlight to electricity. Altogether, solar currently makes up less than 1 percent of U.S. energy, according to the Solar Energy Industries Association. The nation now has just two large-scale solar thermal systems — one 354-megawatt set of facilities has run continuously in the Mojave Desert in California for about 20 years, and another 64-megawatt plant came online in Nevada last year. When it comes to solar photovoltaics, the largest system in the nation so far is the 14-megawatt plant at Nellis Air Force Base in Nevada. However, more solar farms are rapidly under construction. Utilities in California and Florida have announced plans for at least eight new solar thermal power stations totaling more than 2,000 megawatts, while two photovoltaic projects are currently under development in California that would bring a total of 800 megawatts of power. "You can expect to see a lot more of these solar power systems as the market for these technologies gets built out and manufacturing costs come down," said Cliff Chen, senior energy analyst for the Union of Concerned Scientists, a science advocacy group. Pros Solar energy is clean, renewable and has vast potential. "If a concentrated solar power system was built that was a hundred mile by hundred mile square in size out in the Southwest (United States), which has some of the best solar resources in the entire world, or you covered 1 percent of the country's land with photovoltaics, either strategy would be more than enough to meet the country's entire energy demand," Chen said. "The sky really is the limit." Creating solar farms to meet energy demands while avoiding concerns regarding greenhouse gas emissions "could create hundreds of thousands if not millions of jobs in the U.S.," he added. Another advantage of solar power is that it is usually produced during peak demand for electricity — for instance, during hot summer days when air conditioners are often full-blast. That means that value of the electricity that it produces is significantly higher, Chen explained — for example, at least 20 to 30 percent higher in California. Photovoltaics have a slight advantage over solar thermal systems in that the latter do not require water, which can be an understandable advantage in the desert, where many solar farms are located. On the other hand, solar thermal systems can work in the shade for brief amounts of time, since the heated fluids they depend on can stay hot enough to generate electricity for some time without the sun, while photovoltaics need sunlight. Cons The sun is not always out, which means solar power suffers at night or when it is cloudy. However, solar thermal systems can store excess solar energy as heat in molten salt, to generate power even in the dark. Photovoltaics could store energy in batteries, but this will likely not happen on a large scale until battery costs drop significantly. The high cost of solar power has traditionally kept it from entering the mainstream — for instance, the budget for the 64-megawatt Nevada Solar One concentrated solar power system ran up to $250 million. Still, the price of solar power has declined steadily over the past 30 years, and continues to drop significantly each year, Chen said. "Credible sources of cost estimates from the U.S. Department of Energy, the National Renewable Energy Laboratory and electricity industry consultant firms such as Black & Veatch suggest the cost of photovoltaics will drop by half in the next 10 to 15 years and by 30 to 40 percent for concentrated solar power systems in the same time frame," he noted. "That drop in price for concentrated solar power could even make it competitive with natural gas." One concern is that a lot of the sunniest land in the western United States ideal for solar power is federally managed, with many agencies often having overlapping jurisdictions there, making it challenging to set up solar farms on it, Chen explained. Also, the best places to build solar farms are typically in the desert, far away from the population centers that need the most electricity, often meaning that new power lines have to be raised, potentially running into more jurisdiction issues as well as "not-in-my-backyard" concerns. "Transmission lines are some of the least popular public projects in the country," Chen said. "The good news is that a lot of solar power projects can be built on smaller scales, which means that they can be located closer to existing transmission stations and not need as much in the way of lines." What do you think?