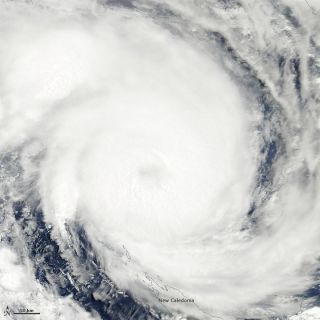 A dangerous tropical cyclone has been roaring through the South Pacific recently, but so far no casualties or damage has been reported.

Tropical Cyclone Jasmine formed as a tropical storm over the South Pacific Ocean on Feb. 4, and strengthened to a tropical cyclone two days later. On Feb. 7, Jasmine's clouds stretched over the northern tip of New Caledonia, as can be seen in a new NASA satellite image.

Jasmine is as strong as a Category 4 hurricane, and has clipped the island of Anatom, Vanuatu, according to AccuWeather.com.

The JTWC forecast that Jasmine would move toward the southeast, past New Caledonia, before changing course toward the east. The storm was expected to modestly intensify over the next 24 hours, and then gradually weaken.