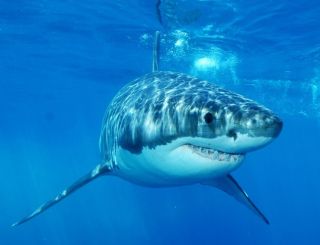 Want to travel the oceans alongside great white sharks, but your busy schedule and fear of death always seem to get in the way? There's an app for that.

Now anyone with an iPhone or an iPad (and $3.99 to spare) can follow along in near-real time with a dozen of the world's most iconic predators with the app Expedition White Shark.

Domeier has studied great white sharks for many years, and was one of the first people to ever outfit adult great white sharks with satellite tracking tags — the key to the new app. His adventures were chronicled on the National Geographic Channel program "Shark Men."

The tags are affixed to the sharks' dorsal fins. When the fins break the surface of the water, the tags send a signal to a satellite. If the satellite is overhead at the time, it picks up the shark's location and plots the location on a map.

A few of the tracked sharks are already somewhat famous. There's Bruce, who's often seen by cage divers. "For whatever reason he is not shy of cameras," Domeier said. "He's a bit of showoff." And last year an injured great white shark named Junior got a lot of attention, thanks to some gruesome images sent around the blogosphere.

"He is doing well," Domeier told OurAmazingPlanet. Junior last checked in around Point Arena, Calif., fairly close to shore. "If anybody was thinking of surfing at Point Arena that day, that was maybe a little bit of a warning," he said.

Shark, where art thou?

"There are definitely different personality traits with respect to surface behavior," Domeier said. "Some sharks spend more time at the surface than others." Some sharks check in just 10 times a year, others ping the satellite on a weekly basis.

Gender also appears to play a role in where sharks like to hang out. Although he acknowledged that the sample size is small, and the project has tagged three times as many males as females, Domeier said a pattern has begun to emerge.

"Males are pretty simple," he said. They travel between coastal waters off California and Mexico and an area near Hawaii in a predictable pattern each year. "They go out and come back like clockwork," Domeier said.

"The females have disappeared for two years, and we've finally figured out where they are," he added.

Satellite tags revealed the female sharks, the larger of the two sexes, spend up to 18 months in the deep, open waters in the middle of the Pacific Ocean, and swim as deep as 3,300 feet (1,000 meters), a finding that Domeier called exciting.

"The theory we're working on now is they basically come to the coastal areas to mate and to give birth," he said.

"The adults are huge, so oftentimes they can break fishermen's lines and crash right through nets, but juveniles are not, and they are undoubtedly the most vulnerable," he said.

Much about great white sharks remains mysterious, including just how many there are. A recent University of California, Davis and Stanford shark study estimated that only about 220 adult great white sharks are living off the North American Pacific coast.

Domeier said he thinks there are more, but that data are sorely needed, as are newer, more accurate models for estimating population numbers.

The species as a whole, which can be found in oceans from 60 degrees north to 60 degrees south, is listed as "vulnerable" by the IUCN, an international body that assesses the state of species around the globe.

Worldwide, shark populations have declined steeply in recent years, many falling victim to overfishing for their valuable fins. Shark fins fetch high prices as a prized ingredient in shark fin soup. The soup was banned in California last year.

Domeier said he hopes the app raises enough money to allow him to move the tagging into the next phase — using tags with cameras.

"Now we know where [great white sharks] go, but we don't really know what they're doing when they're there," he said. If the giant fish could bring back photographs of their travels, it would push the science further, he said. [Image Gallery: Great White Sharks]

Tags can be designed to pop off an animal at an appointed time, and float on the surface of the sea until researchers can come by and retrieve them, allowing scientists to sort through a virtual travelogue, complete with pictures, of the shark's activity.

Domeier said that such work might be possible within two years with the proper funding.