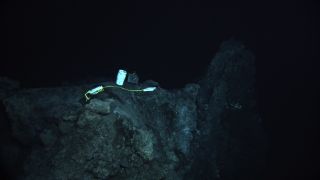 At the summit rim, a navigation beacon marks the location of a hydrophone listening to the eruptions, a shrimp trap and a tephra (volcanic ash) collector above the erupting vent.
(Image: © Bill Chadwick, Oregon State University)

Eyes and hands are tools of the trade for geologists interpreting ancient landscapes. They often use textures and shapes to give intricate accounts of when, where and how rocks were buried, broken, tumbled or melted.

But what if scientists had to rely on only their ears? Marine geologist William Chadwick and colleagues faced that challenge when they discovered a massive underwater landslide in the western Pacific Ocean two years ago.

Chadwick's team recorded the groans and rumbles of the landslide, which occurred at a large underwater volcano (called a seamount) in the Mariana volcanic arc. The sounds not only helped them interpret the largest underwater eruption and landslide ever recorded, but they may also help explain how other mysterious seamounts form and grow.

The volcano, named NW Rota-1, is located about 60 miles (100 kilometers) north of Guam and rises more than 5,000 feet (1,500 meters) from the ocean floor. Chadwick, a geologist at Oregon State University, and his team have been studying it since 2004.

"Amazingly, it's been active every time we've visited," Chadwick told OurAmazingPlanet. "It's one of only two places in the world where we've actually seen active eruptions underwater."

Because NW Rota-1 almost constantly spews gas and lava, Chadwick's team decided to place instruments on the seafloor near the volcano that could collect year-round data on water and gas chemistry, seismic activity and sounds.

But the events at the volcano in late 2009 were a little more than the team had bargained for. A large, explosive eruption shook NW Rota-1 in August of that year, triggering a massive landslide that moved 53-million cubic meters of earth — a volume equal to about 20,000 Olympic-size swimming pools.

When the scientists returned to the site in early 2010, they found that nearly all their equipment had been buried or carried away. But luckily, one instrument had survived the landslide: a hydrophone, an underwater microphone designed to record the low-frequency vibrations associated with earthquakes and other geologic events. Scientists recorded the rumblings of the 2011 Japan earthquake with a hydrophone.

Chadwick's team became the first ever to record an entire sequence like what happened at NW Rota-1, from small precursor earthquakes to the large volcanic eruption and ensuing landslide. Never before had scientists documented, minute by minute, such a lengthy, large-scale underwater event.

"It's a pretty fascinating record," Chadwick said. "Different kinds of sounds have different distinctive signatures. An earthquake sound has a different pattern than an eruption sound, and the landslide is especially distinctive because it generates really big, low-frequency rumbling."

What happened went something like this: from April to August, the hydrophone recorded a series of quiet rumblings at NW Rota-1, which were probably small earthquakes caused by magma moving under the volcano, Chadwick said. Suddenly, the hydrophone recorded a huge, extremely loud sound that lasted nearly four straight days, which the team pinpoints as the volcanic eruption. In the middle of that, there's an even louder rumbling with multiple peaks, lasting about 10 hours. That, Chadwick said, was the landslide.

The events recorded at NW Rota-1 may help explain the mysterious processes that build and shape many of the oceans' seamounts, particularly landslides.

"Volcanoes on land do have landslides, but not as often. Underwater, it seems to be a much more frequent and larger-scale occurrence," Chadwick said. "I don't think I ever appreciated the integral part these landslides could play in the growth of submarine arc volcanoes."

The team's findings are detailed in the December issue of the journal Geology.