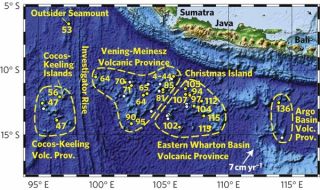 If you ever find yourself on a leisurely submarine ride through the northeastern Indian Ocean, be on the lookout for some amazing views: more than 50 large seamounts, or underwater mountains, dot the ocean floor, some rising as high as 3 miles (4,500 meters).

The Christmas Island Seamount Province, as the area is known, spans a 417,000-square-mile (1 million square kilometers) swath of seafloor.

Just how the massive underwater structures got there has been up for debate, but some new geochemical detective work may have solved the mystery.

The seamounts are made of recycled rocks from the ancient supercontinent of Gondwana, said geochemist Kaj Hoernle of the University of Kiel in Germany. Their turbulent geological history explains the massive size and puzzling placement of these features.

Tens of thousands of seamounts line the floors of the world's oceans, but exactly how most of these formed is unclear.

Some, like the Hawaiian–Emperor seamount chain that extends northwest from the Hawaiian Islands, formed over hotspots in the mantle, just as the islands themselves did. Other seamount chains were created when tectonic plate boundaries and other fractures in the ocean crust allowed lava to escape and harden at the surface.

But the Christmas Island Seamount Province doesn't fit either of these models, Hoernle said. The structures are too widespread and diffuse to have formed over a single hotspot; they’re also aligned perpendicularly along breaks in the ocean crust, which means they didn't form above a fracture.

"We knew they were volcanic," Hoernle told OurAmazingPlanet, "but beyond that, it was more or less a mystery."

Geochemistry to the rescue

To solve the puzzle, Hoernle and his colleagues set out to map and collect samples of the seamounts.

The evidence they brought back to the lab told an interesting story: The rocks' geochemical signatures didn't match those from mid-ocean ridges or hotspot volcanoes. Instead, they matched the signatures of continental rocks — in particular, rocks from northwestern Australia.

Using this clue and tectonic plate reconstructions, Hoernle's team traced the rocks back to the ancient supercontinent of Gondwana.

Around 150 million years ago, greater India, Australia and Burma — all once part of this supercontinent — began to rift away from each other. This created the spreading center (or mid-ocean ridge) that eventually formed the Indian Ocean. As this was happening, the bottom part of the continental crust delaminated, or "peeled off in a sheet," Hoernle said.

The peeled-off continental crust mixed with the upper mantle, heated up and eventually was pulled to the surface again at the Indian Ocean spreading center.

"When the spreading center passed over that area, it essentially sucked the continental bits and pieces up again," Hoernle said. "Because these pieces have more volatile content [such as water and carbon dioxide], they produced more melted material than the normal upper mantle, and formed seamounts instead of the normal ocean crust."

The first seamount in the Christmas Island Province formed around 136 million years ago. The spreading center continued to create seamounts until about 47 million years ago, when it migrated away from the part of the mantle containing the recycled continental crust, Hoernle said.

The team's findings are detailed in the December issue of the journal Nature Geoscience.