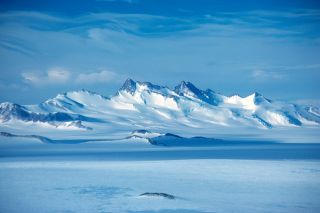 If the recent centenary of humankind's first visit to the South Pole has you longing for a taste of the adventures of yesteryear, a new book offers a feast for the eye — and the mind  — of any would-be polar explorer.

"The Roof at the Bottom of the World: Discovering the Transantarctic Mountains" (Yale University Press, 2011) takes armchair travelers on a journey through both time and space. The coffee-table book offers a rousing account of discovery and scientific adventure in one of the most inaccessible mountain ranges on the planet, along with the geological backstory of how the peaks got there in the first place. [See images from the book here.]

The book's author is one who knows Antarctic adventure firsthand. Edmund Stump, a veteran geologist, has been traveling to the Transantarctic Mountains since the early 1970s. In those days, some areas were still unmapped, said Stump, a professor at the School of Earth and Space Exploration at Arizona State University.

"In my early career I was going out just to see what was there. It was exploration in its true sense and it was a real honor," he told OurAmazingPlanet.

The Transantarctic Mountain Range is one of the longest mountain belts on Earth, stretching 2,175 miles (3,500 kilometers) across the continent. The peaks run from the Ross Sea to the Weddell Sea, separating the two halves of the continent, east from west.

Through more than 200 pages of compelling text and historical maps, all complemented by dozens of Stump's own stunning photographs, the scientist recounts the dramatic history of humanity's push to explore the farthest reaches these formidable mountains.

Stump is well-acquainted with the challenges of such work. He has spent 13 seasons working in the deep field in Antarctica, and, except for the planes and helicopters that dropped him there, spent his days in much the same way as the first scientists who accompanied Antarctic explorersto study the properties and origins of the rocks that form the Transantarctic Mountains.

Though getting there is a logistical chore, the work itself is fairly straightforward. "I take out my hammer and I bash [the rock] off," Stump said. "That's what I do. You hammer it loose and you put a label on it and you put it in your backpack and you take it home."

After bashing rocks all day, Stump said, falling asleep in the permanent daylight of austral summer isn't a problem.

After 40 years of such work, and taking some 8,000 photographs of a majestic place where few humans will ever tread, Stump said a book felt like a natural step.

"I love my work," Stump said. "I think the Transantarctic Mountains are an incredible place, and have been a secret, really, of those of us that have worked down there. And I felt a real desire to share that experience with people."