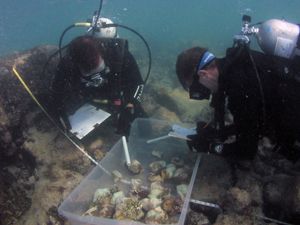 A coral reef damaged when a boat ran aground in the Florida Keys National Marine Sanctuary in 2002 has made an encouraging recovery after a nearly decade-long restoration effort.

Hundreds of groundings happen in the sanctuary each year, and conservationists are hoping that this reef-restoration and monitoring effort will help inform future endeavors.

A boat hitting the reef can topple coral heads or grind coral colonies into tiny fragments, damaging and killing coral that may have taken centuries to grow.

After sanctuary staff assessed the damage to the reef, restoration biologists used special cement that hardens underwater to reattach 473 corals and coral fragments that had been toppled or dislodged during the grounding.

The main coral species damaged in the ground was boulder star coral, a primary reef-building coral in the Florida Keys.

Researchers monitored the progress of the restoration by using digital photos and special computer software to count the types and amounts of coral species in the damaged areas, as well as nearby undamaged sites that served as a point of comparison.

The sanctuary tracked the coral recovery for eight years. By 2009, the reattached coral fragments were undistinguishable from the adjacent, uninjured coral colonies. A year later, the amount of coral at the restoration site was higher than at the reference site.

"The monitoring allowed us to document changes to the restored coral and measure the success of this restoration," said sanctuary-restoration biologist Hatsue Bailey. "With continued use of these methods, as well as additional monitoring, we learn more about habitat changes at this location and improve upon existing restoration strategies."

The owner of Lagniappe II paid $56,671.27 in a negotiated settlement. Those funds were used to pay for response, damage assessment, monitoring and some restoration costs.