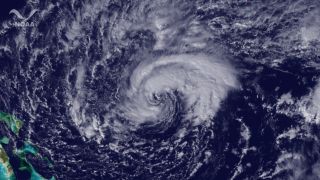 Tropical Storm Sean's swirling clouds were caught by the GOES East satellite on Nov. 8 after it formed.
(Image: © NOAA)

Tropical Storm Sean is moving steadily along its path toward Bermuda, though it is no longer expected to reach hurricane status.

Sean first formed on Tuesday (Nov. 8), becoming the 18th named storm of the 2011 Atlantic hurricane season . The season begins each year on June 1 and ends on Nov. 30, though storms have been known to form before and after those endcap dates.

Sean currently has maximum sustained winds of 65 mph (100 kph), just below the hurricane strength threshold, according to the latest National Hurricane Center (NHC) update. It is currently 360 miles (580 kilometers) west-southwest of Bermuda, and a tropical storm warning is in effect for the island. The storm is expected to bring between 1 and 3 inches (2.5 and 7.6 centimeters) of rain to Bermuda.

Swells and rip currents are expected to remain a hazard along the southeastern coast of the United States, the NHC warned. Rip currents have already claimed one life, according to The Weather Channel.