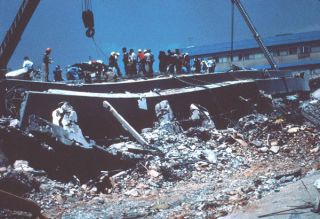 The collapsed General Hospital in Mexico City after the earthquake struck.
(Image: © USGS)

The quake was felt as far away as Guatemala City, Guatemala and Houston, Texas, over an area of about 319,000 square miles (825,000 square kilometers), but the most intense shaking occurred in Mexico City, Ciudad Guzman and the Pacific Coast towns of Lazaro Cardenas, Ixtapa and La Union, according to the U.S. Geological Survey (USGS).

The earthquake caused landslides, rockslides, and sandblows, opened cracks in the ground and damaged or destroyed buildings. In Mexico City, 412 buildings collapsed and another 3,124 were seriously damaged. About 60 percent of the buildings were destroyed at Ciudad Guzman, Jalisco.

The damage killed at least 9,500 people according to USGS figures, with another 30,000 people injured and more than 100,000 left homeless. Between $3 million - $4 million in damage was caused by the quake. [Top 10 Deadliest Natural Disasters in History]

The earthquake's epicenter was actually just off the west coast of Mexico, several hundred miles from Mexico City, but the geography of the region made the city particularly susceptible to the shaking. The city lies in a drained lake bed, so large portions of the ground are made up of a silt and clay mixture that has a high water content and acts to amplify the shaking. This liquid-rich soil is also susceptible to liquefaction , which causes it to essentially act like a liquid, taking away the support of buildings and other structures.

The earthquakes waves also caused a resonance with the natural "pitch" of the area that amplified the shaking to certain tall buildings.