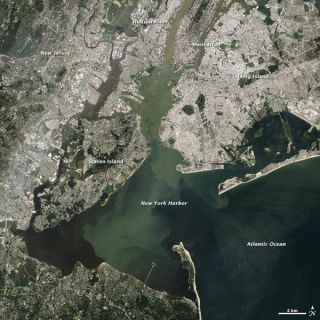 Satellite observations of the damage wrought by Hurricane Irene have been stitched together into one continuous "gigapan" image of the U.S. East Coast.

Hurricane Irene began its Eastern Seaboard onslaught as it approached landfall in North Carolina on Aug. 27. The winds and rains of the hurricane, then a Category 1, battered the Outer Banks. The damage continued with major inland flooding up through the Mid-Atlantic states as well as a significant storm surge in coastal bays and rivers.

Irene made its final landfall at Coney Island in New York City on the morning of Aug. 28 as a strong tropical storm. Its worst effects spared New York, but the storm caused major flooding in states across the Northeast. [Related: Why New York City Was Lucky ]

After Irene barreled through, scientists began assessing the damage, conducting aerial surveys and reading stream gauges. Yesterday (Aug. 31), the U.S. Geological Survey's Landsat 5 satellite took a series of images of the East Coast areas struck by Irene. The gigapan image is 0.49 gigapixels and viewers can zoom in and out on different areas to see how they were affected by the storm.

Irene resulted in the deaths of more than 40 people, according to news reports, and caused several billion dollars in damage, giving 2011 a record-setting 10 billion-dollar disasters so far.