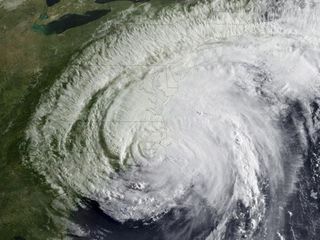 Hurricane Irene made landfall near Cape Lookout, N.C., around 7:30 this morning (Aug. 27) and satellites caught the action.

When it hit, Irene was (and still is) a Category 1 hurricane on the Saffir-Simpson scale of hurricane strength with winds of 85 mph (140 kph).

Despite this weakening, Irene still poses a major threat because of its considerable size. Hurricane-force winds extend up to 90 miles (150 kilometers) from the center of the storm, and tropical storm-force winds extend 260 miles (415 km).

Half a million people have been reported to be without power in North Carolina and Virginia. Irene's rains are drenching the area and winds have reportedly knocked down trees.

Rains are expected to total between 6 to 10 inches (15 to 25 centimeters), with isolated areas seeing up to 15 inches (38 cm). These large amounts of rain increase the risk of flooding, especially in areas where the ground is already saturated from previous summer rainstorms.

Storm surge -- the mass of water the hurricane's ferocious winds push ahead of the storm -- is also a major concern along the coast.