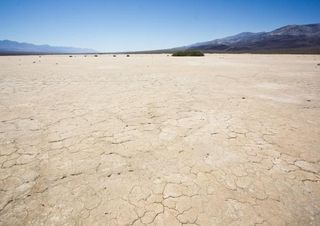 This summer has been a scorcher in many parts of the nation, but this sweat-inducing heat has nothing on the highest temperature ever recorded in the United States, the whopping 134 degrees Fahrenheit that sent the mercury soaring in Death Valley on July 10, 1913.

Death Valley , as its name suggests, is famous as the hottest, driest, lowest place in North America. Average highs in the summer months in these barren salt flats regularly hit above 100 degrees Fahrenheit (38 degrees Celsius). The greatest number of consecutive days with a maximum temperature of 100 F or above was 154 days in the summer of 2001, according to the U.S. Geological Survey (USGS). The summer of 1996 had 40 days over 120 F, and 105 days over 110 F, making it the hottest summer on record.

The heat that comes off the rocks and dirt is then driven back down by the high walls of the valley. As it descends, this only-slightly-cooler air heats up again. This super-heated air blows through the valley, fueling the extreme temperatures , according to the USGS.

In 1911, the first permanent weather station was established at what is now Furnace Creek Ranch. On July 10, 1913, the weather station measured a record high of 134 F (57 C), a temperature that has not been beat anywhere in the United States since. [Related: The Harshest Environments on Earth ]

That temperature has, however, been beat elsewhere in the world.

This temperature was considerably higher than in nearby towns, as was noticed by meteorologists several years later, according to Weather Underground's Wunder Blog. One problem with the reading was that the thermometer was "self-registering," implying that no human confirmed the temperature reading. Another was that the thermometer was placed very close to the surface, which was covered with tarred concrete, which could have absorbed the sun's rays and artificially inflated the temperature reading.

The World Meteorological Organization notes the work of Italian scientists who calculated that the temperature probably should have been 132.8 F (56 C). If this were the case, the Death Valley temperature would be the highest ever recorded.