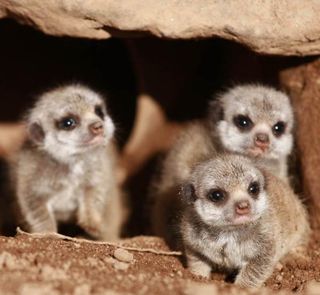 For the past four weeks, Fraggle has been caring for her new arrivals in their underground burrow. The four kits left their burrow for the first time a few days ago and are beginning to explore their enclosure with their parents.

Zoo manager, Mark Challis is delighted with the new arrivals , The meerkats are definitely one of the most popular animals in the zoo and in the past few years we have had great success with our breeding group. In fact, last year several of our meerkats were transferred to other zoos in the UK and have since gone on to have their own young.

A group of meerkats is called a 'mob' or a 'gang' and the four new arrivals take the number of meerkats in the zoo to nine. Every adult meerkat has an important role within their mob. One will always be on watch and you can often see them standing on their hind legs, propped up by their tails. This allows them to spot any potential predators and give off an alarm call to warn the rest of their gang. Other meerkats in the mob baby-sit, gather food, etc.