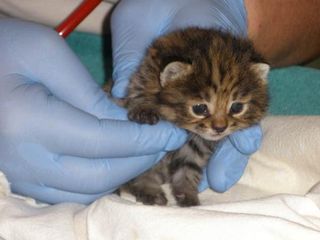 One of the African black-footed kittens born at the Audubon Nature Institute in New Orleans, La.
(Image: © Karen Ross.)

Hard science has given rise to some soft and fuzzy results at the Audubon Nature Institute in New Orleans, La. two adorable African black-footed kittens.

The male kittens, members of an endangered species rarely seen in captivity, are the first of their kind to be born from a frozen embryo via in-vitro fertilization.

The tiny cats were born just weeks ago (Feb. 13) to a surrogate mother , but their story goes all the way back to 2003, when sperm was collected from a 6-year-old male named Ramses in Omaha, Nebraska.

The sperm was frozen and, two years later, it was combined with an egg, creating embryos in March 2005. The embryos were then frozen, and remained so for almost six years. Finally, in December 2010 the embryos were thawed and transferred to a female black-footed cat named Bijou.

Sixty-nine days later, the two kittens became the first of their species to be born as a result of in-vitro fertilization using frozen genetic ingredients.

"The science of assisted reproduction for endangered species has come a long way in the past fifteen years, but every time we can point to another 'first' in the field it gives us hope," said Audubon Nature Institute President and CEO Ron Forman.

"We are proving this science works and that we can provide hi-tech options for many different species as the situation grows more and more critical for wildlife across the globe," Forman added.

Although the black-footed cats might look similar to domestic kittens found anywhere across the globe, their numbers, according to the Feline Conservation Federation, are very low. There are only 19 such cats in zoo collections in the United States, and only 40 around the world.

Native to arid regions of southern Africa, the black-footed cat is one of the smallest wild felines. The tiny cats, which average only about 3 pounds (1.4 kilograms) at maturity, are nocturnal and are poorly studied in the wild. While hunting them is prohibited, farmers in their range will sometimes poison or trap them.

"The next step for us will be to clone the black-footed cat and transfer the embryo to a domestic cat surrogate," said Audubon Center for Research of Endangered Species Senior Scientist C. Earle Pope, who is the lead scientist on the project.

Meanwhile, the two black-footed kittens are being cared for by their surrogate mother and staff at the Audubon research center.