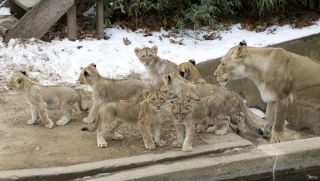 The seven lion cubs born at the Smithsonian National Zoo this past summer have all officially been named.

The names were chosen in part by the zoo, and in part through a contest hosted by the zoo and the Washington Post, in which contest participants sent in their suggestions for the names of two of the cubs and a video explaining why they nominated the names.

"We were touched to receive so many thoughtful name suggestions for the cubs from so many different sources," said Dennis Kelly, director of the zoo. "Each of the seven final names has a special meaning or connection that the cubs will carry with them during their time here at the National Zoo."

Three of the lion cubs were born to the zoo's 6-year-old lion Nababiep in September, just three weeks after her sister, 5-year-old Shera, gave birth to four cubs.

This morning, before the cubs made their debut in the lion yard, the zoo announced their names:

The names of Nababiep's cubs, which were born Sept. 22, are:

Both litters were sired by Luke, who was the Zoo's sole male lion until the birth of the cubs.

The two litters are the result of years of careful research and observation and the first for the zoo in more than 20 years.

Starting Dec. 20, lion keepers will decide on a day-to-day basis whether the cubs will spend any time in the yard, how long they will be out and when. This decision will be based on the weather and how the cubs adjust to being outdoors.

Eventually, the zoo hopes to develop a pride of African lions (Panthera leo) with the cubs, their mothers and their father.