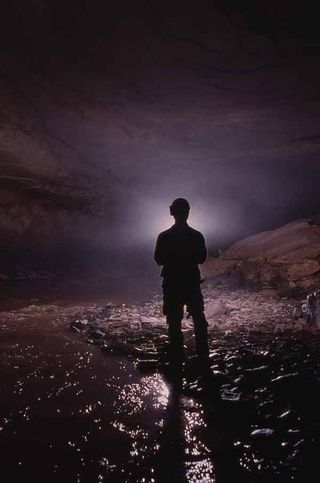 Cave scientists take no less than three light sources with them when exploring the subterranean world.
(Image: © Richard Young |)

The creatures that dwell in caves have evolved many strange adaptations to live in their dark, sometimes forbidding underworld landscapes, but after decades of hard work, scientists are teasing out their secrets.

Macroinvertebrate biologist Steven Taylor at the University of Illinois has spent 20 years delving into the mysteries of cave life. Many of these organisms are pale, furtive and multi-legged. Some lack eyes or any other light-sensing organs.

With a handful of other cave biology specialists, Taylor is documenting invertebrate life in the limestone caves of Arkansas, Missouri, Texas and southern Illinois, as well as in Lava Beds National Monument in California and in mountainside caves in Great Basin National Park in Nevada. [Related: Coolest caves to visit .]

The work has its highs and lows. Taylor has rappelled through thick mats of spiders clogging a cave entrance in central Texas, explored lava tubes in the Galapagos Islands, and collected millipedes, spiders, pseudoscorpions and other creatures making their living from bacteria or fungi growing on the guano of bats or crickets that roost in caves by day and forage in the outer world at night.

"I've even had a cave maggot named after me," Taylor said. The larval form of Megacilia taylori, a phorid fly that often frequents caves, is a maggot.

Scientists often need a talent for squeezing through tight places and at least three flashlights against the darkness.

"In a cave, there's no light and literally once you get away from the entrance twilight zone you can wave your hand in front of your face and it's like somebody severed your optic nerves," Taylor told OurAmazingPlanet. "There's nothing."

Since there is no sunlight to supply caves with energy via plants, the primary energy source of cave ecosystems is debris that fell or washed in or was brought in by organisms that wandered in. The base of the cave food chain begins with guano and leaf litter, and "fungi and bacteria grow on that, then millipedes and springtails tiny, mite-size bugs graze on that," Taylor said. "And then there are the larger organisms spiders and pseudoscorpions that feed on the springtails."

Other cave-dwellers include pale, multi-limbed crustaceans known as amphipods that swim in the water and feed on debris and are themselves consumed by sometimes eyeless aquatic salamanders.

"There are creatures that live in these caves that are unique to those spots in the world," Taylor said. "It reflects how little we know about the world and how much more there is to discover in our own backyards."

Although some cave animals venture between the subterranean and surface worlds, many species would not survive more than a few minutes on the surface, especially in the hot, arid conditions often found out in the West. In this way, caves are like islands, Taylor explained, with the animals living in them often completely cut off from the rest of the world; and just as is seen with island creatures, cave animals typically adapt unique ways to live in their isolated habitats, making them rarities.

For instance, Taylor and his colleagues recently discovered new species of springtails in Illinois caves, insect-like creatures ranging in size from a breadcrumb to the period at the end of this sentence.

"We're literally turning over every stone to look for them," he said. "Back at the lab, we then have to view them under high magnification under the microscopes, numbering hairs on them to describe them scientifically." He and a colleague sent a report on the creatures to the Illinois Endangered Species Protection Board in March and they are preparing a more detailed description of them for a scientific journal.

The researchers are limited by the size of the underground passages they can squeeze through. Many animals fit into far smaller fissures in the rock.

"We're just looking at a corner of the population," Taylor said.

Their work is revealing bit by bit how much cave life depends on the surface. For instance, in a survey of nine Texas caves, Taylor found that those surrounded by human structures such as parking lots or apartment buildings had very little life inside. Only a handful of cave crickets and other creatures dwelt in those caves, while similar caves with a great deal of undisturbed land around them had large, healthy communities of cave crickets and other organisms.

"Caves are part of the fabric of life, and everything is interconnected," Taylor said. "How we act in the world has influences on the ecosystems we touch, including those in caves."

In the future, Taylor and his colleagues hope to explore the fungi and bacteria the cave ecosystem depends on.

"How humans treat the land influences how animals that roost in caves forage on the surface, which in turns affects the cave community the fungi and bacteria and the animals that live on them," Taylor said.