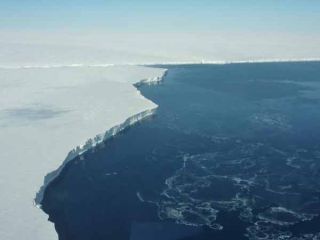 The Getz Ice Shelf extends several miles into the ocean from the Getz glacier as it empties into the ocean along the Antarctic coast. The vertical face of the ice shelf is almost 200 feet high and is estimated to extend another 1000 feet below the ocean surface.
(Image: © NASA/Dick Ewers)

On Nov. 21, NASA's 2010 IceBridge campaign flew a final flight over Antarctica, completing its ice-observing mission for the year.

IceBridge is a six-year campaign to survey and monitor areas of Earth's polar ice sheets, glaciers and sea ice and how they are responding to climate change. Scientists use the mission's instrument-laden DC-8 to fly over the Arctic and Antarctic and take measurements of polar ice, such as its thickness.

The mission was begun in part because of the death of the ICESat satellite, which took various measurements of the Antarctic ice. Until the next ICESat is up and running in 2015, the task will fall to researchers to continue taking measurements.

In total, this year's IceBridge mission was able to make 10 flights, taking advantage of 84 percent of its allocated flying time. The research teams spent 115 hours in the air collecting data and flew 40,098 nautical miles (74,261 kilometers), which is almost two complete trips around the Earth.

"We collected landmark sea ice data sets in the Weddell, Bellingshausen and Amundsen seas," said Michael Studinger, a researcher with the mission. "We have now flown over every ICESat orbit ever flown by completing an arc at 86 degrees south [latitude], the inflection point of all ICESat orbits around the South Pole."

The team faced bad weather, a plane that needed replacement parts and various other issues, but were still able to collect the data they needed.

"It is always tricky working in Antarctica where equipment and weather delays are facts of life. Nevertheless, the IceBridge field team performed admirably in addressing technical problems and working hard to be ready to fly when the weather was good," said Kenneth Jezek, the mission's science definition team co-leader from Ohio State University. "The result is another hard-won and extremely valuable data set."

The research team recorded definite changes since they flew their last flight over Antarctica in October and November 2009.

"It was interesting for me to see how different the ice surface over Pine Island Glacier looked compared to last year. This year we had a lot of bad weather in the area with a lot of snow storms," Studinger told OurAmazingPlanet. "The fresh snow on the surface makes the surface much smoother than last year and covers a lot of the crevasses."

Pine Island Glacier is a large ice stream flowing west-northwest along the south side of the Hudson Mountains into Pine Island Bay in the Amundsen Sea of western Antarctica. Crevasses are deep crevices, or fissures, in glaciers. Researchers involved with the project will spend the next few months analyzing the data to determine how the surface and sea ice of Antarctica have been affected by rising ocean temperatures.

"We are only just beginning to look at the data," Jezek said. Some of the data seem to show bottom crevasses cracks that can be hundreds of meters tall and that open upwards into the bottom of ice shelves (which float on the ocean surface) and fill with sea water. "They have whetted our appetite to dig into the complete data set as soon as we can," Jezek said.

The team hopes that this information will be able to provide them with a better understanding of what is in store for the Arctic and Antarctic in years to come.

"It is so important to go back and measure these glaciers year after year so that we can distinguish between the signal from an unusual year and the signal of the more long-term response of these glaciers and ice sheets to a changing climate," Studinger said.