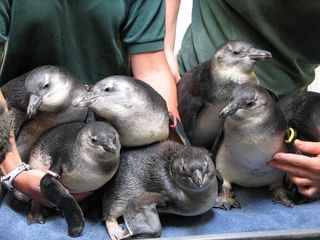 The New England Aquarium's most successful African penguin breeding season recently ended with the birth of 11 new chicks, according to aquarium biologists.

Those 11 hatchlings have since grown into juveniles and rejoined their parents in the aquarium's African penguin exhibit. [Related: Flightless Birds: All 18 Penguin Species ]

This success was no accident. With African penguins dwindling in the wild , breeders left little to chance. Breeding season kicked-off with a "mating draft," continued under tight supervision behind the scenes, and ended 80 days later with young penguins reuniting with their parents in the exhibit.

Penguin biologists handpick the penguins that will hook up.

"If they mated willy-nilly, everyone would be related to each other," said Andrea Desjardins, a penguin biologist at the New England Aquarium. "We're just trying to make sure we're breeding these animals as responsibly as possible."

During penguin match-making, what matters most is on the inside way inside, in a mating pair's DNA. Opposites attract, genetically speaking, and aquariums participate in a special program to keep their penguins genetically diverse.

"It's like Match.com for penguins," said Steven Sarro, director of animal programs at the National Aviary in Pittsburgh.

The genealogy of each African penguin in this program is unquestionable. When aquarium breeders meet every two years they rank penguins by their genes, and these rankings decide mating pairs.

The most recent mating meeting was at the New England Aquarium. Desjardins said the draft was like a scene from a fantasy football draft, with sticky notes covering boards and penguin biologists hashing out trades "We need three females! We need 4 males! Indoor or outdoor?"

Deals are struck and penguins are paired. Some return home to make babies. Others hit the road.

Their honeymoon was unromantic a white kitty litter box-top inside a modified dog-kennel, with enough blue, plastic aquarium plants to build a nest but that hardly mattered, especially for the experienced.

"As soon as they get behind the scenes and see that room, they know what they're here for," Desjardins told OurAmazingPlanet. "They get right down to business."

Couples are more like friends-with-benefits than husband and wife. The benefits? A couple of eggs.

After a pregnancy that's still not fully understood by scientists, African penguins lay two eggs at most, which they incubate for 40 days. Upon hatching, the average African penguin chick will weigh 2 to 3 ounces (60 to 80 grams) tiny enough to cup in your hand.

Hatchlings and parents bond as long as possible. During this time, the parents feast on sardines and anchovies so they'll have enough food to regurgitate to the chicks.

As early as 60 days after hatching, young penguins can rejoin their parents in the exhibit.

Back with the gang

Young penguins grow fast. This summer's chicks are now adult-sized, yet they will stand-out to the savvy observer.

Feathers are the key. A chick's first set of waterproof feathers are a solid silvery-gray color on its back and head, while its belly is white. The color scheme changes around 2 years of age when white stripes on the eyes and black stripes on the chest mark an adult.

As the New England Aquarium's new penguins grow into adults, they are confined to the exhibit and will never help repopulate African penguins in the wild. Threats to the wild African penguins oil spills and fewer fish must be resolved before breeders would consider releasing the aquarium penguins into the wild, Sarro said.

But by displaying the penguins in Boston, people can connect with these endangered animals without travelling half-way around the globe, which will hopefully raise awareness about their shrinking numbers, Desjardins said.