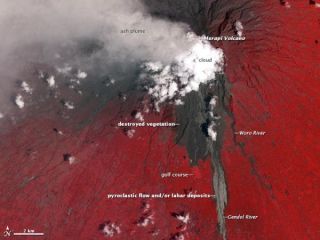 A false-color satellite image from NASA shows the extent of the pyroclastic flows on the south of Mount Merapi.
(Image: © NASA Earth Observatory.)

Indonesia's relentlessly erupting Mount Merapi has killed 259 people so far, according to news reports, though its current eruptions continue at a less fervent pace than in previous weeks.

The current spate of eruptions began almost two weeks ago on Oct. 26.

The official death toll from Mount Merapi now includes 174 burn victims and 85 victims of heart attacks, respiratory problems and other deaths related to the eruptions, according to the Indonesian National Disaster Management Agency. More than 350,000 people have fled central Java for refugee camps. [FAQ: Will Merapi stop erupting any time soon? ]

As the world's largest archipelago made up of 17,500 islands, with 235 million people spread across them Indonesia sits between the world's most active seismic region , the notorious Pacific Ring of Fire , and the world's second-most active region, the Alpide belt. Sandwiched between the two earthquake belts, the islands experience some of the most powerful volcanic eruptions and strongest quakes on Earth.

Pyroclastic flows scorching rivers of gas and rock are the biggest threat during a volcanic eruption, and several were spotted flowing down the mountain during earlier eruptions. Pyroclastic flows may hit speeds of more than 90 mph (150 kph). The volcano's terrain will usually guide the flows, but they can spill over into the surrounding land.

In the above image, NASA's Terra satellite captured evidence of a large pyroclastic flow along the Gendol River south of Mount Merapi.

The scorching volcanic ash belching from Mount Merapi has killed many of the plants and trees within 12.4 miles (20 kilometers) of the mountain, leaving a virtual dead zone in its wake. In the above image, the dark gray area just north of a golf course is a dead zone where a pyroclastic flow burst across the landscape, wiping out everything in its path. Healthy vegetation is bright red in the above NASA image.

Volcanic ash covers trees, weakens their branches and spoils their fruit. More than 3,460 acres (1,400 hectares) of snake fruit trees have been destroyed, wiping out a major source of income for many in central Java, the Jakarta Post reported.

Indonesia is home to 129 active volcanoes. The two most active ones mounts Kelut and Merapi (meaning "mountain of fire") sit on the island of Java, where the Indonesian capital of Jakarta is located, about 310 miles (500 km) northwest of them.

Mount Merapi last erupted in 2006, killing two, but its violent history includes more than 1,300 people who were killed in a 1930 eruption and possibly 70 killed in a 1994 eruption.

While state volcanologists have no way of knowing if the volcano will stop erupting, anyone can now monitor Merapi's eruptions on a new webcam.